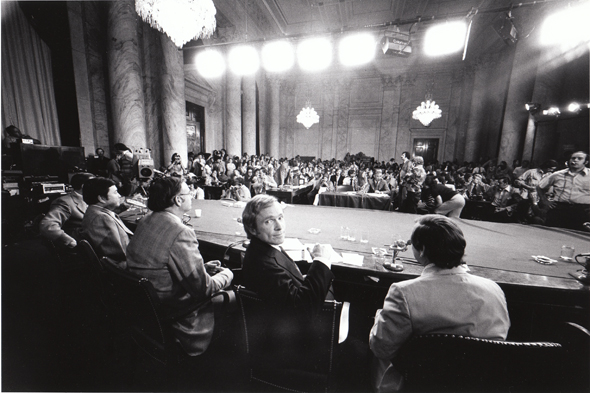 Dick Cavett isn’t the first hardnosed reporter who comes to mind when we think of the Watergate scandal. Probably because he wasn’t so much a capital-J journalist as a cornball-yet-erudite talk-show host. Still, over a two-year stretch he grilled everyone from chief conspirator G. Gordon Liddy to Attorney General Richard Kleindienst to President Richard Nixon’s White House counsel John Dean—an unthinkable degree of reporting by today’s late-night TV standards.

“I set out to do an entertaining talk show when I went into television, never dreaming I would get up to my neck in a national scandal,” says Cavett in a new PBS documentary that aired on the 40th anniversary of Nixon’s resignation in August. The Dick Cavett Show demonstrated the ability of late night to not just make fun of the political elite but to cover hard news with both pointed questioning and a sly wink.

Broadcasting from the Watergate Committee hearing room, Cavett asked senators what they thought of criticisms that their investigation was “a little toothless, flabby, and inept.” Then, after a pause: “Does anyone wanna grab that—or me?”

The consequence? Nixon mentions Cavett 26 times in the White House tapes and explicitly asks his staff, “is there any way we could screw him?”

Yet Cavett wasn’t alone in bringing political coverage, as opposed to just political humor, to the 11:30 slot. Jack Paar took his cameras to the Berlin Wall as it was being erected in 1961. Merv Griffin hosted Vietnam-war protestor Abbie Hoffman, whose iconic American flag shirt was censored by cbs lest it run afoul of flag-desecration laws. And in 1975, Geraldo Rivera hosted the first network viewing of Abraham Zapruder’s graphic film of John F. Kennedy’s assassination, eliciting gasps from the studio audience.

Today, late night can deliver a political punchline, but any actual reporting or analysis comes from satirists like John Oliver, Stephen Colbert, and Jon Stewart, who The New York Times likened to “the modern-day equivalent of Edward R. Murrow” after his filibuster-busting segments on the Zadroga Bill in 2010. More nutritious than chat shows but with better zingers than the nightly news, they have the tools of humor and irony to tell complex stories and the time to do it.

Politics on late night might be making a comeback with Colbert, the heir to David Letterman’s throne. “There is quite a lot of appetite for a blending of pop culture, humor, news, commentary, and serious political discussion,” said Geoffrey Baym, author of From Cronkite to Colbert: The Evolution of Broadcast News. “This is going to be the first time to see how well that plays trying to reach a mass audience.” While Cavett turned his entertainment show into news, today, the news is entertainment.

Has America ever needed a media watchdog more than now? Help us by joining CJR today.
Chris Ip is a CJR Delacorte Fellow. Follow him on Twitter at @chrisiptw. This story was published in the September/October 2014 issue of CJR.