The Roots of Modern Conservatism: Dewey, Taft, and the Battle for the Soul of the Republican Party | By Michael Bowen | University of North Carolina Press | 272 pp, $45.00.

The origins of the modern conservative movement are ostensibly well-known. William F. Buckley and National Review gave rise to the new right, incarnated in 1964 Republican presidential nominee Barry Goldwater. Goldwater’s trouncing at the hands of Lyndon Johnson in that year’s election cleared the way for the slightly more moderate Richard Nixon to become president in 1968. Ronald Reagan followed on Nixon’s heels, and the conservative movement reached critical mass with Reagan’s ascent to the presidency in 1980. 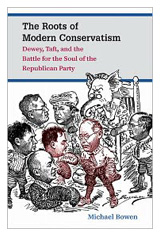 According to Michael Bowen, an historian at Westminister College in Pennsylvania, this family tree is incomplete. As he argues in The Roots of Modern Conservatism: Dewey, Taft, and the Battle for the Soul of the Republican Party, the key combatants in the battle for the future of the Republican Party were New York governor Thomas Dewey and Ohio Senator Robert Taft. Beginning in the early 1940s and continuing until Taft’s death in 1953, Dewey and Taft established opposing camps within the GOP and vied for control and leadership over the party’s electoral strategy and, eventually, governing philosophy. “In 1944 their policy agendas were very similar, but as their feud intensified and the nation transitioned to peacetime and the Cold War world, Taft and Dewey increasingly stressed these [ideological] differences publicly in combative tones that made both party elites and common voters believe the two factions to be thoroughly irreconcilable,” Bowen writes.

Taft, dubbed “Mr. Republican” for his prominence and Senatorial leadership, was something of a forerunner of the Goldwater-Reagan conservative, according to Bowen. In contrast, Dewey, the GOP presidential nominee in 1944 and 1948, was a self-described “liberal Republican,” a moderate on all issues. George H.W. Bush would be the closest Republican in the Dewey mold in the current era, but quite simply liberal Republicans no longer seem to exist. Of course, that fact is illustrative of the fact that Taft essentially won the war over the Republican Party’s direction, even though Dewey won far more battles (Taft never received his party’s nomination, despite running for it three times).

Bowen makes it clear that it was during the Eisenhower era, from 1953-1961, that the new right really emerged. This argument is slightly counterintuitive, since once might not expect a right-wing movement to coalesce during what was the first Republican administration in over twenty years. However, “[w]ithout a strong [conservative] leader to coalesce around, this new group organized itself on the basis of conservative ideas and principles and solidified the ideological divisions with the GOP and American politics more broadly,” Bowen writes. “Eisenhower’s personal moderation led to numerous policies that further angered conservatives and provoked them to challenge the administration and the GOP from within.”

The Roots of Modern Conservatism does a terrific job at broadening the history of the modern Republican Party. With the exception of a few studies, such as Joseph Lowndes’s From the New Deal to the New Right (which Bowen unfairly ignores), most works on today’s GOP essentially begin with Goldwater. The Arizona senator and his ideology did not emerge out of nowhere, however, as Bowen demonstrates. His contention that Taft was the precursor to the Goldwater-Nixon-Reagan Republicans is convincing, but only partly. Certainly, Taft’s libertarian-leaning views on the welfare state, education and health care would be familiar to today’s GOP activists. However, his strict constitutionalism and worries about overseas foreign-policy commitments were completely jettisoned by Goldwater and his followers. Bowen elides these distinctions far too quickly, giving them only a single paragraph to concede that “they also adopted a number of positions that Taft would have found questionable.” Reprehensible is more like it.

Similarly, Bowen’s argument that Dewey and Taft were originally nearly identical in philosophy early on but evolved in opposite directions is only somewhat persuasive. True, by the time Dewey released his Princeton lectures, in 1950, he and Taft were further apart than ever. But The Roots of Modern Conservatism largely ignores Taft’s heartfelt prewar isolationism, which separated him from the internationalist Deweyites to a tremendous degree. Likewise, Bowen erroneously paints Dewey as a mere opportunist, devoid of any committed policy positions. That claim overlooks the governor’s principled opposition to McCarthyism, for instance. Both Dewey and Taft were politicians attuned to the public mood, true, but had they been empowered to do so, they would have taken the Republican Party—and the United States—in vastly different directions.

Where The Roots of Modern Conservatism truly shines is in documenting the struggles between Dewey and Taft over control over the party. The 1940s have rightly been seen as the golden age of the Democratic Party, but Bowen’s original research reveals important political and philosophical debates simultaneously occurring within the GOP. Most of the book details the minutiae of the Dewey/Taft battles, chronicling the Republicans’ internal deliberations as the party suffered one presidential election defeat after another. Bowen argues that the Dewey faction won the competition because they were simply superior politicos, but surely the Taft-ites’ hostility to strong defense and popular government programs was part of the story.

In any event, though Dewey secured the nomination in 1944 and 1948, and his chosen successor Eisenhower became president, it was Taft that ultimately saw his philosophy (or at least more of it) prevail. The last chapter of The Roots of Modern Conservatism is the only one devoted to the Eisenhower presidency, and you wish there was more, as it’s the most compelling section of the book. Still, Bowen succeeds in demonstrating how and why the would-be Goldwater Republicans were so frustrated with Eisenhower, who essentially picked up where Dewey left off.

One of the strengths of this book is the way it reveals how Ike’s moderation had its roots in the Dewey faction of the Republican Party. Eisenhower succeeded in attracting many from the Taft faction and turning the GOP into a moderate party, precisely what Dewey had failed to do. However, as Bowen writes, “this transformation was built on an unstable base: the personal reputation of Dwight D. Eisenhower.” When Ike went, so did any right-wing acquiescence to moderation. Nixon and Goldwater became the leaders of the Republican Party, and the story continues from there.