In Try to Tell the Story, film critic and scholar David Thomson offers proof that you needn’t be raised by your mother’s psychiatrist or survive a gruesome (if not entirely factual) recovery from drug addiction in order to write a memoir worth reading. Instead, he presents a quietly compelling tale about coming of age in postwar London and finding, in a darkened cinema, a way to begin making sense of the world. 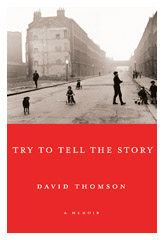 Yet the family romance is not entirely absent from Thomson’s narrative. At its heart is the search for a father who was only sporadically present, physically and emotionally, throughout the author’s childhood. “I am trying to tell you the truth—but I don’t think I know the truth,” he writes. “I am still, years after his death, bewildered and pained by my father, and trying to love him—or find his love for me.”

Toward the beginning of the book, we learn that Thomson’s father never wanted children. When his wife announced her pregnancy, he left her—but was never capable of making a definitive exit. For years he returned on weekends and holidays, presumably out of a sense of duty to and love for his son. Yet Kenneth Thomson never explained to the boy where he’d gone or even acknowledged that he’d been away. As it turns out, he had moved in with another woman across town. “So many men were away,” Thomson writes. “And the war’s pressure was so extensive that it was easier to think your father had some unusual, or secret, obligation… something mysterious and confidential. War so often generates social changes—and so the failure of our family, or its collapse, was covered up by the dream of military need.”

Though their bond was tenuous, father and son did enjoy some rosy times together, mostly related to sports. This is a happy thing for Thomson, but not so much for the reader who is baffled by cricket and lacks an encyclopedic knowledge of World Cup champions. The passages devoted to these father-and-son outings are most engaging when the author sticks to evocative details: the smog-shrouded soccer grounds and the “deep, stewed smell” of the crowds, or the glow he felt when his father praised him for a good catch. But the endless roster of players and exhaustive descriptions of matches tend to bog down the story.

We get a much more vivid sense of Thomson when he expounds on other subjects: the stammer that plagued him through most of his childhood, his tough-talking and imaginary sister Sally, and his initiation into the world of cinema. Though he can’t remember the first film he saw, he does recall his confusion as a young child, unable to grasp that the people onscreen weren’t actually in the room with him. Later, he describes his shock of recognition during a showing of Red River. The father-son struggle depicted in Howard Hawks’s 1948 Western clearly struck a nerve, and the seven-year-old Thomson initially refused to leave the theater when it ended. “I want to stay there,” he told his aunt. “I nodded at the screen, but I meant the valley where they rode and the community of the men,” he continues. “It was a place I longed to be, in the picture, a part of it.”

As the title suggests, this is a story about telling stories. It is a kind of meta-memoir in which the author offers total transparency, freely admitting when he is unsure about something and acknowledging certain liberties in shaping his narrative. By employing this tactic, he assuages the dubious reader and gives a nod to our heightened, post-Frey scrutiny of the form. But mostly Thomson is keen to examine how seldom stories get to the truth of a matter—and their usefulness in constructing a version of reality that is easier to live with.

The book comes to a close around Thomson’s nineteenth year, when he decides to forgo Oxford in favor of film school. For a while it looks like we’re going to get a real Hollywood-style ending, complete with a chance encounter with an old flame and lots of flirting and making out. But Thomson can’t resist pulling us out of the action for one last aside. He wants to tell us that the book isn’t everything he had hoped it would be, that it inadvertently allows his father to overshadow his mother, who was in reality a much stronger presence in his life.

In short, he wants to tell us that stories ask many more questions than they can ultimately answer. “Stories leave things out and introduce a shape, or an order, that no one noticed at the time or the moment,” he writes in the coda. “And if this book … ends with a large decision, still the larger quandary that prompts it is left unsettled. So I must admit that I recognize that you might feel you need and deserve more. I feel the same about myself.”

Thomson is being a bit hard on himself. Ambiguity may be unsettling in our own lives, but it is exactly what imparts three-dimensionality to a narrative, and makes us want to turn the page. Leave the tidy endings to Hollywood. Thomson has given us a tender, unsentimental picture of his youth, with all its messiness and mystery intact, and a reader can’t ask for more than that.

Has America ever needed a media watchdog more than now? Help us by joining CJR today.
Michelle Vellucci writes about dance and the arts in New York City.