In 1904, Canadian prime minister Wilfred Wilfrid Laurier declared that “The 20th Century Will Be the Century of Canada.”* In January 1940, a writer in Japan asserted that the century needed to be characterized by Japanese dominance. Whatever the defects of Life magazine’s publisher Henry Luce’s famous essay called “The American Century,” he was closer to the mark than the others. 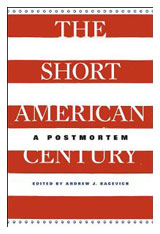 The Short American Century: A Postmortem, edited by Boston University political scientist Andrew Bacevich, turns several contributors loose on Luce’s article and its legacy. Published in Life’s February 17, 1941 issue, the long editorial asserted that America must assume the mantle of global leadership: “It must be a sharing with all peoples of our Bill of Rights, our Declaration of Independence, [and] our constitution…It must be an internationalism of the people, by the people and for the people.” Luce declared that America’s manifest destiny was to spread its ideals and culture across the globe, sharing its blessings with all the peoples of the world. Doing so would only “lift the life of mankind from the level of the beasts to what the Psalmist called a little lower than the angels.” Such would mark the “first great American century.”

Luce’s essay was well-read and well-remembered. Life magazine was, as Bacevich writes, “arguably the most influential popular periodical in American history.” It was the first all-photographic magazine in the United States, mixing social commentary with light-hearted entertainment and popular culture. Luce himself was profoundly influential, the founder of Time and Sports Illustrated, and an important figure in Republican circles.

In the book’s opening essay, Bacevich wryly notes that the rest of the Life issue in which Luce’s essay appeared contained only advertisements, features on women’s fashion, an examination of the current Broadway hits, and a look at the do’s and don’ts of campus etiquette. “References to the economic crisis of the previous decade were nowhere to be found,” Bacevich writes. “The world beyond America’s borders might seem stormy, but at home an atmosphere of hopeful normalcy—and fun—prevailed.”

Those familiar with Bacevich’s previous writings will not be surprised at the themes of the essay, and of the book as a whole. The Illinois-born professor has emerged as the single most respected radical critic of U.S. foreign policy. In bestselling books like The New American Militarism and The Limits of Empire, he excoriates the combination of American missionary zeal, nationalism, and military power that convinces the country to pursue global ambitions. For Bacevich, whether the party in power is Democratic or Republican makes little difference—both are wedded to unwise and unrealistic ideas about America’s role in the world.

What makes Bacevich’s voice such a formidable one, aside from the clarity and force of his arguments themselves, is that he is critiquing U.S. foreign policy from the right. He is a deeply religious paleoconservative, culturally traditional and patriotic. He served in Vietnam, where his brother-in-law was killed, and his son was killed fighting in Iraq. Nobody can hurl accusations of treason and weakness at such a credible figure.

Bacevich is now convinced that, such as it ever was, the American century is most certainly over. “[T]he conditions that once lent plausibility to visions of an American Century had ceased to exist,” he writes, speaking of the period between 2006 and 2008. He offers the essay collection “as a sort of dissenter’s guide to the American century.”

It doesn’t quite function that way, though. Stanford University professor David Kennedy argues nearly the exact opposite. “As international regimes go, much of the American Century, despite the chronic tensions and occasional blunders of the Cold War (and especially the tragedy of Vietnam), was on the whole a laudably successful affair,” he writes. President George W. Bush’s policies largely undid the goodwill amassed by America from the 20th century, but the cause is hardly forsaken, according to Kennedy.

University of California, Irvine historian Emily Rosenberg likewise dissents from Bacevich’s dissent. “During the Cold War, U.S. strategy exported to the world the assumptions and practices of America’s consumer republic,” she writes. American elites mistakenly assumed that the practices that made America wealthy would do the same for the rest of the world, but there is little doubt the American way of buying and selling had a tremendous impact.

Historian Walter LaFeber is more in line with Bacevich’s thinking. “The American Century was stillborn,” he writes. U.S. “military power could not create an American century in Central and Eastern Europe, China or the Soviet Union itself, any more than comparably overwhelming military power some sixty years later could incorporate Iraq, Afghanistan, Ukraine, Georgia, or other parts of the Middle East and central Asia into an American Century.” To which one might retort that Europe and China, with their robust capitalism, look far more like visions of America than the Communists who ruled them ever would have liked.

Still, even if LaFeber, like Bacevich, overstates the follies of American foreign strategies in the 20th century, the essayists’ humility and pessimism is more than welcome. Especially since 9/11, the failures of American power have outweighed the successes. Every single essay in this book is thought-provoking and engaging, however much one agrees or disagrees with their specific analyses. Though not filled with policy prescriptions, The Short American Century implicitly suggests that the country would benefit from lowered sights. Paradoxically, an America less focused on international dominance would find itself in a better position in the world. If the book’s lessons are heeded, Americans may find that decline is no more inevitable than are delusions of international dominance.

Correction: The original version of this piece misspelled the first name of the seventh prime minister of Canada. He is Wilfred Laurier, not Wilfrid. The relevant sentence has been corrected. CJR regrets the error.