Though many of today’s American writers are politically aware and active, their modes of engagement tend to be indirect, their campaigns waged through personal essays, polemics, and oblique fiction. It is hard to picture Jonathan Franzen, for example, going mano a mano in public against what he believed to be a corporate marauder. Little over 100 years ago, though, two major American writers gleefully assumed the muckraker’s mantle. 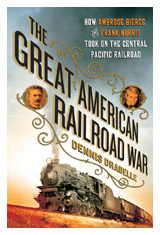 Dennis Drabelle’s The Great American Railroad War recounts how Frank Norris and Ambrose Bierce—literary figures of the first order—devoted themselves to investigating and dispatching the Central Pacific Railroad, a company that, at the time, was a model of unchecked corporate greed. The book comes at a propitious moment - not only is it a valuable reminder that muckraking can turn up anywhere, even among the literati, it’s an inspiring testament to reporting’s ability to demolish, or at least inflame, the arrogant and the powerful.

San Francisco Chronicle publisher William Randolph Hearst was lucky enough to employ as his star columnist one of the most explosively vituperative journalists of the late nineteenth century: Ambrose Bierce. Few American writers embodied Ishmael Reed’s adage—“writin’ is fightin’”—as completely as Bierce, the memorably ornery author of The Devil’s Dictionary. As a result, he had garnered national notoriety for his attacks on pretty much everything—religion, patriotism, war, politicians, feminists, Chinese missionaries, horseshoes, misguided punctuation, lengthy speeches, and innumerable other targets. (I wrote a longer essay on Bierce for CJR’s July/August 2012 issue.)

Hearst admired Bierce’s memorably articulated ferocity, which also sold newspapers. The writer was dismissed by his foes as “Bitter Bierce,” but Drabelle suggests there was a soft underbelly to his “veneer of worldly cynicism,” that he was “one of the most sensitive, most easily wounded men to take up the pen for a living - as well as one of the most perceptive.” Perceptive about how we rationalize barbarity, mediocrity, and corruption, yes, but he showed little empathy toward his victims, large or small.

The ruthless, well-financed Central Pacific Railroad deserved no sympathy. The company had helped build the transcontinental railroad and reaped tremendous profits as it built a corrupt and ruthless monopoly along the way. Though the Central Pacific had accepted government loans to cover construction costs, its executives had persuaded and in some cases bribed members of Congress to consider a bill excusing the debt, which amounted to many millions.

Many on the West Coast harbored a tremendous resentment against the bullying tactics and savage labor practices of the railroads, which also threw mud at Hearst when necessary. The publisher recognized that the implacable Bierce was just the man to not only attack but demean the railroad magnates. So, in 1896, the publisher sent his star kvetcher to Washington, DC, along with an experienced team of reporters, cartoonists, and researchers to keep the railroads from dismissing the debt. The news crew would provide the facts; Bierce would fling the hydrochloric acid.

Drabelle does a succinct job of setting up the fracas. He chronicles the merciless campaign waged by Bierce (and is honest enough to admit that his current employer, The Washington Post, was on the wrong side of the battle) with generous quotations from Bierce’s columns, identifies the major players (CPR honcho Collis Huntington) and the paid-off congressmen. There is more than enough in this lively story of rabid reportage to justify the author’s belief that, taken together, these columns comprise Bierce’s journalistic masterpiece. After a public shellacking that made the company and its allies look like inept gangsters, the Central Pacific Railroad paid its debts. Score one for Bierce, who defined a corporation as “individual profit without individual responsibility.”

The bulk of The Great American Railroad War is dedicated to Bierce, but Drabelle also details the efforts of another respected writer, Frank Norris, to settle the railroad’s hash. Norris’s 1901 novel The Octopus is a thinly fictionalized account of the Central Pacific and its misdeeds; the book rivals the best of Emile Zola in its melodramatic fervor and political punch. That said, Norris departs from reality in his account of the crimes of the Central Pacific Railroad and its sister line the Southern Pacific, such as perpetuating the myth that the latter encouraged the infamous massacre of protesting settlers at Mussel Sough. Drabelle shows where Norris went astray for the sake of panache, thankfully without undercutting the value of his accomplishment. The Octopus remains, after a century, an enormously entertaining expose of American corporate greed and strong-arm chicanery.

Near the end of the book, Drabelle argues that, despite their successes, Norris’s and Bierce’s efforts against the Central Pacific Railroad suffered from “bad timing.” If only their crusade had come a decade earlier, the author argues, it could have done more lasting good, because it might have led to a reform of the “basic political structure,” rather than a momentary slap-down of a hubristic company. Those who believe that robber barons will always be with us will be left unconvinced. Still, the overall impression left by the enjoyable The Great American Railroad War is one of possibility rather than despair: here’s a model from journalism’s past that might be of use today. Perhaps a Kickstarter campaign to send Bill Maher and a team of reporters to Washington, DC with a specific target of corporate/congressional malfeasance to dispatch?