On July 6, 1964, Henry Holland, the brilliant and eccentric scion of a wealthy Texas family, was driving his motorcycle down a country road when a dog ran into his path. Holland swerved, his bike slammed into a roadside guard rail, and he was killed instantly. 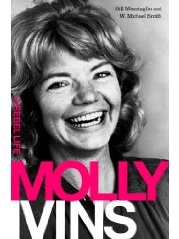 Holland’s death might have been lost to history—a meaningless tragedy among so many others—except for the fact that it would go on to produce, in a roundabout way, one of the most famous journalists in America. Holland was the boyfriend, and quite possibly the fiancé, and either way the soul mate, of a Smith College sophomore named Mary Ivins. Molly, for short. And his loss, suggest the authors of the new biography Molly Ivins: A Rebel Life, turned the future columnist away from the path for which she’d been groomed—a privileged existence among the Texas elite—and toward the one for which she’d be known.

The turnabout wasn’t merely a matter of Holland’s death, of course. She had shown a flair for writing at an early age, and despite a penchant for reading that would make her seem withdrawn (her family nicknamed her “The Mole”), she aspired to celebrity. Throughout her teenage years, she carried a note, addressed to her future self, folded in her wallet: If she hadn’t become famous by the age of twenty-five, she pledged, she would commit suicide.

Still, had a dog not crossed her boyfriend’s path that day in 1964, Ivins would likely have become Molly Holland—and we, in turn, would likely have been deprived of Molly Ivins, the Molly Ivins—the reporter who skewered politics and politicians in Austin and Washington and places in between; the columnist who combined her Texas roots and patrician education to brilliant (and devastating) effect; the advocate who fought relentlessly for civil liberties; the celebrity who, upon her death, was eulogized by everyone from President Bush to Maya Angelou; the writer who was compared, as a stylist, to Mark Twain, Ambrose Bierce, H.L. Mencken, François Rabelais, Lenny Bruce, and the prophet Jeremiah; the charismatic character—six feet tall, with a mega-watt smile and a shock of red hair—who swore with abandon, drank with even more, puttered around barefoot, laughed more loudly than was proper, and had a dog named Shit.

Ivins was “an extraordinarily fastidious self-chronicler,” the biographers Bill Minutaglio and W. Michael Smith note, and their book benefits not only from fresh interviews of Ivins’s relatives, colleagues, and many, many friends, but also from the information contained within the thousands of personal documents she donated to the public archives at the University of Texas at Austin—among them phone logs, travel itineraries, reporters’ notebooks, memos to and from editors, Broadway tickets, grocery lists, medical records, grade-school report cards, and intimately personal letters. The gift in this case was a nod toward generosity and transparency by a woman who valued both, but also, the authors speculate, a reflection of her desire to demonstrate that “in real life she was far more complex than the public persona familiar to millions of readers.”

If so, they have carried out her wish, and in meticulous detail. Minutaglio and Smith trace Ivins’s childhood in River Oaks, the ostentatiously wealthy Houston enclave where she grew up; her education at Smith, where she developed both her confidence as a communicator and her fondness for strong cocktails; and her summer spent in Paris, during which she perfected her French and became enamored of John Steinbeck, James Baldwin, and Charles De Gaulle. An internship at the Houston Chronicle, followed by a year at Columbia’s J-School, led to a short stint at the Minneapolis Tribune and a long one at the progressive Texas Observer.

It was at the latter, covering the Austin Statehouse, where she fully developed the writing voice—rollicking, wry—for which she’d be celebrated. The Observer, the authors note, gave Ivins “free rein not just to address issues that barely dented the pages of the mainstream papers—the out-sized issues of poverty, racism, systemic corruption—but to do it with a chiding, confiding derision that two-stepped back and forth between a mocking condemnation and a can-you-believe-it kind of wonderment.” And she embraced the freedom. Confronted with the swaggering, booze-fueled theatricality that was the Texas political scene of the early 1970s, Ivins found irreverence. The kind that would lead her, later on, to dub George W. Bush as “Shrub”—and to render such pronouncements as “Ronald Reagan is so dumb that if you put his brains in a bee, it would fly backwards.”

Her Observer days solidified both Ivins’s opposition to journalistic detachment as a value and a possibility (“There is no such thing as objectivity,” she would say; in fact, “I actually think it is pernicious as a goal”), and, relatedly, her progressive politics. It also set the stage for the one-foot-in, one-foot-out relationship she would have, throughout her career, with Establishment Journalism: She worked at The New York Times, but was never really part of it. She was nominated for a Pulitzer, but never won. Friends visiting her Austin home were amused to find that many of the awards she did win had been put to use as coasters, trivets, and serving trays.

In fact, an enduring quality of Ivins’s life was, as the book’s title makes clear, rebellion itself. A good many of her quirky Mollyisms were not truly quirks at all, the authors suggest, but minor mutinies that gradually coalesced into personal idiosyncrasies. Her parents named her Mary? She’d go by Molly. Her mother wanted her to become a Lady of Society? She swore, and smoked, and drank, and took up with fellow swearers and smokers and drinkers. Her father wanted her to become a good Republican? She cavorted with leftist radicals during a time when being a leftist radical actually meant something, and went on, sure enough, to become the most famous liberal columnist in the country. Her fans were eager for her to hurry up and finish her next book? She printed—and wore—a t-shirt emblazoned: DON’T ASK ABOUT THE BOOK.

A Rebel Life could easily have reduced Ivins’s life to a kind of ongoing dialectic: public persona versus private person, expectations versus here’s where you can put your expectations. It could have also devolved into a simple study of the journalist’s body of work. But thankfully, the authors resist reductive aesthetics in favor of something both more challenging and more rewarding: empathy. They provide a portrait of their subject that is loving in the most literal sense, one that treats her simply as a person, with the attendant freight of ego and insecurity, strength and frailty.

And since biography is one of the few contexts in which that modern scourge—voyeurism—is an asset rather than a weakness, A Rebel Life’s candor is immensely valuable, if sometimes also uncomfortable in its intimacy. The book shares, in searing detail, Ivins’s many brushes with tragedy. In addition to Holland’s death, there was the alcoholism (“I have wasted so much time getting drunk,” she wrote in a note to herself. “I have wasted so much time hating myself for it the next day”), there were the bouts of depression, the loss of friends to illness and accident, the breast cancer that would weaken her for years before taking her life, the suicide of a nephew she loved as a son, the relationship with her domineering father that ranged from tense to turbulent to, the authors suggest, traumatic.

In that sense, the biography is like its subject: unrelentingly honest, unapologetically unfiltered. Fuck it, this is how it was. Though Ivins may be remembered mostly for her work and, with it, her wit, her biography remembers her in the way that she probably would have preferred: as someone who fought against the pressures placed on her by retreating into, and then projecting out, her own humanity. By laughing. By listening. By being a good friend. And by combining those things in the most productive way she knew how: by writing.

Has America ever needed a media watchdog more than now? Help us by joining CJR today.
Megan Garber is an assistant editor at the Nieman Journalism Lab at Harvard University. She was formerly a CJR staff writer.