In the summer of 2007, one of the hottest debates in America centered on immigration. Every pundit and politico had an opinion on the merit-based system proposed in the McCain-Kennedy Bill, either criticizing its rejection of family ties or heralding its standardization of the path to citizenship. In an effort to cut through the noise and give people a deeper understanding of the bill, Ian Bogost of Persuasive Games created a “newsgame” called “Points of Entry,” which debuted on the op-ed section of The New York Times’s website. The game asked players to construct hypothetical immigrants—specifying their clothes, education level, English proficiency, and more—in order to literally “out-qualify” another candidate. 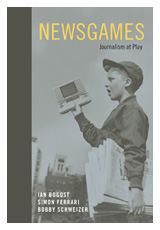 The immigration bill never passed—in fact, it never even came to a vote in the Senate. Yet “Points of Entry” allowed players to grasp potential pitfalls of the bill that had seldom been conveyed by the traditional media. In Newsgames: Journalism at Play, Bogost and his coauthors make a broader case for such games, arguing that they allow people to experience news in novel ways. “There is nothing medium-specific about journalism,” writes Bogost, “no reason that its output must take the familiar form of text, image or video.”

Bogost, an associate professor at the Georgia Institute of Technology, is a pioneer when it comes to the confluence of journalism and gaming. His games invariably deal with real-world political and social issues. Some of his more provocative titles include “Killer Flu,” about the mutation and spread of pandemic influenza, and “Fatworld,” which lets players choose diet, exercise habits, and socioeconomic constraints (KFC may be the only joint within walking distance), then cope with the consequences (obesity or heart disease).

In their book, Bogost and his colleagues, Simon Ferrari and Bobby Schweizer, address the advantages and challenges of newsgames in a variety of forms, including infographics, puzzles and documentaries. Some examples of newsgames are modern-day twists on cultural mainstays, such as “Scoop!”—a crossword puzzle that downloads headlines to form clues and answers. Others take traditional journalistic methods, such as data collection, to the next level. “Budget Hero,” produced by American Public Media, allows players to balance the federal government’s budget instead of merely looking at such data in a bar graph.

“The sheer number of possible priorities that arise from replay may make the game’s most important statement about the national budget: it’s complex and riddled with conflict,” notes Bogost. In his view, games don’t have to be built around a single, conclusive news story. In fact, he argues, they are actually are more successful when they are as dynamic and open-ended as the news itself.

Bogost is quick to point out the controversial nature of certain “real-world” games, and their struggle for legitimacy. Two such games are “JFK Reloaded,” which restages the assassination of John F. Kennedy from the perspective of the gunman, and, most notoriously, “Super Columbine Massacre RPG!” The latter was created to help those affected by the massacre. Yet it struck most viewers as insensitive and inappropriate. In these situations, Bogost concedes, “game developers might not yet have proven themselves as responsible commentators on public issues.”

Many of the ideas put forward by the authors are intriguing. Still, it’s hard to ignore the fact that creating newsgames requires time and money—things many media outlets don’t have much of these days. Bogost insists that software subsystems, which enable developers to forgo writing code from scratch, can greatly speed up the development process. With such systems in place, goes the argument, the venerable Mario character can easily become the victim of, say, insurance fraud or spousal abuse.

But Bogost’s own experience at The New York Times is perhaps the best index of the challenges faced by newsgames. In the spring of 2007, Persuasive Games inked a deal to create one editorial game per month for the paper’s online op-ed section. The initial contract was to run for six months, and the company would be paid at the standard columnist’s rate of $1,500 per item.

The company’s debut was “Food Import Folly,” which introduced players to one of the Food and Drug Administration’s thorniest challenges: inspecting vast amounts of foreign food at domestic ports. Next came “Points of Entry”, the immigration game. Then things went awry. Bogost says the editorial desk began rejecting the studio’s ideas, such as a game about gun laws following the Virginia Tech massacre. What’s more, the completed third game, called “Steroid Slugger”, about steroids and baseball, was never released. Despite this disappointment, Bogost cuts the paper considerable slack: “As budgets tightened and staff reduced, who could blame an editor for making compromises? Certainly nobody would notice if a videogame didn’t make it onto the Web site.”

That, in a nutshell, is one of the primary challenges faced by newsgames. Bogost and his colleagues are still groping for the precise solutions. Meanwhile, their book pushes the profession to think differently about how current events can be turned into systems of scenarios and variables, instead of mere stories.

Has America ever needed a media watchdog more than now? Help us by joining CJR today.
Alyssa Abkowitz is a reporter at SmartMoney Magazine. Her work has also appeared in Fortune and The Wall Street Journal. Tags: gaming, Ian Bogost, journalism, newsgames, Page Views