Back in the 1970s, under the leadership of Ben Bradlee and Katharine Graham, The Washington Post was ambitious, influential, and profitable. Thanks to its Watergate coverage—and to Hollywood’s cloak-and-dagger rendering of that reportage in All the President’s Men—the paper enjoyed renown far beyond the confines of the industry. 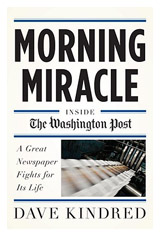 By 2007, however, when Dave Kindred began to write what he first envisioned as a “valentine to journalism,” this golden age had long since come to an end. The Internet had blown a huge hole in the paper’s revenue stream, as print advertising declined and the classified sections thinned. The owners were preparing to overhaul the Post’s senior leadership, and the newspaper continued to hemorrhage money, subscriptions, and staff.

Kindred, a former sports reporter at the paper, realized it probably wasn’t the best time to pen that valentine. Instead, he decided to write a book “about a great newspaper doing its damndest to get out of this mess alive.”

For the next two years, Kindred interviewed executives and editors, reporters and interns. With boyish wonder, he watched them work. He listened to their war stories. When they won awards, he beamed. And although Morning Miracle: Inside The Washington Post isn’t a love letter to the news business, its author clearly has a lot of affection and reverence for the paper and its modern history, which began in 1933, when financier Eugene Meyer bought the Post at a bankruptcy auction.

Within a decade, Meyer had tripled its circulation. Since then, his descendants—Phil Graham, his son-in-law; Katharine Graham, his daughter; Donald Graham, his grandson; and Katharine Weymouth, his great-granddaughter—have overseen the newspaper’s operations, guiding it through boom and bust, war and peace and (of course) Watergate.*

They also presided over a shrewd program of diversification. These days, The Washington Post Company is almost loath to identify itself as a newspaper enterprise. It calls itself “a diversified education and media company whose principal operations include educational services, newspaper and magazine print and online publishing, television broadcasting and cable television services.” Its most propitious purchase was probably the acquisition of Stanley H. Kaplan Educational Centers Limited, a test-preparatory company, in 1984. As the Internet changed how Americans consume news, and as the Post tried to figure out how to make money off its website—an ongoing process in both cases—Kaplan has kept the newspaper afloat.

As for the paper’s relationship to the Web, that is a story all by itself. In comparison to other major American newspapers, the Post developed its Web presence early on. Yet it approached this new medium with caution.

“As time was measured in the newspaper business world—by years—[Donald] Graham moved quickly into electronics,” Kindred writes. “But by the ever-accelerating clocks of the electronics universe, his movements were those of a nineteenth-century mogul.”

Kindred focuses on two key moments in the Post’s history that almost certainly stunted its growth online. Hindsight is 20/20, of course, but on both occasions, creative members of the newspaper’s editorial staff presented inspired ideas. Both times, management shot them down.

In 1992, Robert G. Kaiser, then the paper’s managing editor, traveled to a multimedia conference in Hakone, Japan, convened by Apple Computer. There he listened to a clutch of visionaries talk about the future of computing and information exchange. Kaiser was so stirred by what he heard that, on the flight home, he wrote a seven-page memorandum to his supervisors, suggesting that “the personal computer would become a virtual supercomputer capable of transmitting and storing large quantities of text, video, photographs, and graphics.”

Reading the prescient memo, the reader can’t help but hang his head.

“Take the Post online by designing the world’s first electronic newspaper,” Kaiser challenged them. Management, worried about the potential cost of such a project, shelved it for years.

More than a decade later, Steve Coll, whom Kindred calls “an old-school wordsmith and a twenty-first-century techie,” proposed the “Beyond Washington” project, which would marry “the newspaper’s mythic history with a future it could shape.” Coll recognized that The Washington Post was a valuable brand name. After six months of analysis, he recommended a drastic expansion of the newspaper’s website in order to grow its audience around the world.

At a retreat on Maryland’s Eastern Shore, he introduced his idea to the newspaper’s management, convinced it would appeal to the publisher, Donald Graham. It didn’t. Instead Graham argued that the Post should stress its local relevance and utility, even as subscribers continued to desert it in droves.

Again, the reader sits crestfallen. Not only at Graham’s response, but at the inevitable fallout: shortly thereafter, Coll decided to leave the newspaper, joining The New Yorker and the New America Foundation. Others followed, including award-winning foreign correspondent Anthony Shadid.

Kindred has a real gift for describing his fellow Posties. David Broder is “a wizened Yoda figure,” for instance. Bradlee is “silver-haired, chesty, the jaw line square and strong.” Other profiles—of Anne Hull, Dana Priest, Len Downie, and Chris Cillizza are rendered no less lovingly (and accurately).

Perhaps because of his previous career as a sportswriter, Kindred is equally adept at describing action in the newsrooms. On November 4, 2008, just after he was forced to retire, Downie is asked by his successor to preside over the Post newsroom on an election night for one last time. The chapter sings. Downie analyzes returns. Editors play with headlines. Designers put together the A1. It’s busy and exciting and fun to read.

As it turned out, 2007 was a good year for many of the paper’s journalists. Reporting, writing and photography from that year won six Pulitzer Prizes in 2008. Awards went to Steve Fainaru (for his dispatches from Iraq), Gene Weingarten (for a whimsical piece about violinist Joshua Bell), and Bart Gellman and Jo Becker (for their profile of Vice President Dick Cheney). These honors were richly deserved. Yet Kindred assigns too much value to them in the context of the Post’s battle for survival. In fact, his Pulitzer mania gets tiresome. Throughout the book, “Pulitzer Prize-winner” is the author’s favorite descriptor.

After all, none of the awards ameliorated the paper’s dismal financial situation. In 2008, The Washington Post Company’s newspaper division lost $192.7 million. Since then, there has been little improvement: according to a Wall Street Journal report in August 2010, “in the two most recent fiscal years, Post Co.’s newspaper division lost a combined $356 million.” Several of the 2007 winners, including Gellman, Becker, and Fainaru, left for employment elsewhere.

Like the rest of the industry, Kindred has no satisfying answer. Which is to say that his book successfully takes the reader inside a great newspaper as it tries to endure, but there is no satisfying sense of closure here, no reassurance that the Post will be able to survive. Meanwhile, there’s no arguing with Pincus’s underlying point: Pulitzer Prizes don’t pay the bills.

Correction: This review originally reported that Katherine Graham was Eugene Meyer’s daughter-in-law, and Phil Graham his son. In fact, Phil was the one who married into the family; Katherine was Eugene Meyer’s daughter. Apologies all around. The relevant section has been fixed. CJR regrets the error. Click here to return to the corrected sentence.

Has America ever needed a media watchdog more than now? Help us by joining CJR today.
David Gura is an associate editor at National Public Radio.