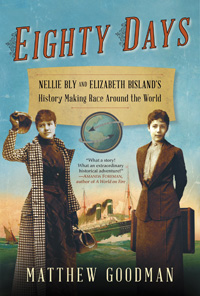 Ah, stunt journalism. where would America’s airport bookstores be without it? Let’s see if I can read an entire encyclopedia in a year. What’s it like to try to live on a minimum-wage job? How about if I just eat at McDonald’s for a month?

But today’s stunt reporters have nothing on their yellow-journalism predecessors. Around the turn of the 20th century, stunts commanded banner headlines and drove massive circulation increases; stunt reporters were treated like celebrities; and stunt stories could have real social significance. The queen of this was Nellie Bly, celebrated for her 1887 exploration of the Women’s Lunatic Asylum on Blackwell’s Island, in which she pretended to be insane in order to expose how the county’s asylums operated. Her story prompted a grand jury investigation and sweeping changes at the asylum.

Two years later, Bly was part of another mad stunt, in which two American women raced to circumnavigate the globe. Bly, from Joseph Pulitzer’s World, and Elizabeth Bisland, from The Cosmopolitan magazine, both left New York on November 14, 1889, trying to outdo Phileas Fogg, the hero of Jules Verne’s 1873 science fiction novel, Around the World in Eighty Days. Clutching their petticoats to keep dry, Bisland and Bly embarked on one of the journalist’s greatest adventures, the foreign reporting trip—at a time when most women weren’t even allowed to cover City Hall.

In Eighty Days: Nellie Bly and Elizabeth Bisland’s History-Making Race Around the World, Matthew Goodman retraces the journey from both women’s perspectives. He follows Bly and Bisland across the continents, recounting their experiences, their reporting, its contemporary reception, and what the two trips might have meant in the long run. Goodman, the author of two other books and the recipient of a Yaddo fellowship, uses their journeys to illuminate several larger themes: the introduction of world tourism, the progress of journalism, the closing of the American frontier, and the slow advance of women’s suffrage.

In the late 19th century, America was curiously obsessed with women and their virtue and “moral superiority.” New York Senator Roscoe Conkling, who surely knew a great deal about the sins to which men were tempted, lathered his speeches with references to “pure, enlightened, and progressive womanhood.” Like Rome with its Vestal Virgins, the rhetoric of the time often treated women as pure beings defending the nation against wickedness though the power of their virtue alone.

This sentimentalizing served to counteract the growing clamor for female suffrage and equal rights. The Reverend John Buckley, for example, was so convinced of women’s moral rectitude that that he “implored male voters to respect female moral superiority by making sure that it wouldn’t be soiled and degraded by putting a bit of paper in a ballot box,” wrote Thomas Beer in The Mauve Decade, his cultural history of the 1890s. It’s reasonable to surmise that many women were sick and tired of all of this lip service to their “moral superiority” and eager to go out and prove to the world their actual capabilities.

Nellie Bly was on the front lines of this battle. A scrappy reporter from Pennsylvania coal country, Bly’s work at The World seemed to involve a new adventure every week. She’d get a job in a factory, attempt to indirectly bribe members of the New York State Legislature, try to buy a baby, and so on.

Elizabeth Bisland was a different sort of journalist. Bisland’s publication, The Cosmopolitan, was one of America’s early magazines of ideas (not until later, under new owners, did it become the “8 Ways to Indulge Your Naughty Side” Cosmopolitan we know today). Bisland wrote and edited the magazine’s books section. She was also “the most beautiful woman in metropolitan journalism,” according to an 1888 article in The Journalist.

This was not a particularly crowded field. In 1880, about 2 percent of American journalists, or 288 of them, were women. These reporters were largely consigned to writing stories about society, a dreadful job path one woman characterized as “one long drawn-out five o’clock tea of somebody else.” Talented journalists like Bly and Bisland were desperate to escape this career prison, which is perhaps how this contest came about.

The round-the-world trip was Bly’s idea. By comparing various timetables for travel, she deduced she could do the whole journey in less than 80 days. (She likely reasoned that circumnavigating the globe was one of the few ways she could top the madhouse story.) The World supposed—correctly, it turned out—that such a trick could help increase circulation. She set out with much fanfare on the morning of November 14, 1889.

The publisher of The Cosmopolitan, John Brisben Walker, first read of Bly’s journey in The World on the day she left. He quickly summoned Bisland. Walker, an eccentric millionaire from Denver who had already made and lost a fortune in iron manufacturing, served in the Chinese army, and earned a PhD from Georgetown before trying his hand at journalism, told his literary editor that she would go around the world, too.

The shy, bookish Bisland thought Walker was joking. She couldn’t go, she protested, she had people coming over for tea the next day. Walker was not joking. Bisland left New York that evening, eight hours behind Bly.

Eighty Days goes back and forth between the two journeys, taking the reader step by step around the world. Bly went east, Bisland west. They crossed paths in the South China Sea around Christmas, 1889. But despite Goodman’s title, it wasn’t really a race—primarily because The World barely acknowledged Bisland’s travels. Walker bet Pulitzer $1,000 that Bly couldn’t complete the journey first, but The World wouldn’t take wager. Bly didn’t find out until she reached Hong Kong that someone else was taking a journey around the world, too.

Along the way, the reader is treated to stories of the hijinks the women endure in the course of their travels. On one boat, Bly is romanced by an impoverished English aristocrat who thinks, for some reason, that the journalist was an heiress to a great fortune. She acquires a fez-wearing monkey somewhere in Asia, who then proceeds to terrorize Bly’s traveling companions for the rest of her trip. At one point in her journey Bisland, having been warned of the dangers of tigers in Singapore, trembles with fright in her hotel room, sure that the rustling she hears as she lies in bed is a tiger preparing to devour her. Only when she lights a match and discovers that her visitor is actually a very large rat can she relax. “This is almost as bad as the tiger,” she admits, “but as I have no intention of attacking this terrible beast and my notice appears to bore him, I blow out the candle and go to sleep.”

But despite the tigers, monkeys, and improvident suitors, The World’s editors occasionally had “trouble finding enough news to keep the public interested in the trip,” Goodman writes. This is a problem Goodman seems to face as well. The book often feels padded, and the reader can sense him straining to tease meaning and broader social significance out of a story that really could be just a travelogue. It also seems the author might be retroactively making more of Bisland than her achievements actually warrant—as if, 100 years from now, some enterprising writer produced a story about the rivalry between Steve Jobs and Steve the IT consultant who works in your office (well, they’re both guys who are into technology and started their own companies . . .).

At times, Goodman is too quick to connect the Bly/Bisland race with the struggle against gender disparities in late Victorian America. Among the women who worked for newspapers, Goodman asserts that “it must have been gratifying to see the names of two female reporters appear daily on the front page of newspapers, on the editorial pages, even on the sports pages—anywhere but the style pages.” Well, perhaps it was gratifying. Possibly these women were also resentful. Or maybe they weren’t really noticing at all. Who knows how they saw this contest?

But if we don’t really know how America’s female journalists thought about these journeys, the country at large eagerly awaited news of the writers’ return—well, Bly’s return, anyway. When she arrived on January 25, 1890—four days before Bisland made it home—she was received “with the sort of fanfare usually reserved for a conquering hero; her race around the world was already being turned from a personal to a national triumph.” The World, which characterized the journey as “a tribute to American pluck, American womanhood, and American perseverance,” even sponsored a contest for readers to guess the exact time the reporter would step off the train. (The winner, F. W. Stevens of 193 Second Avenue, predicted that Bly would return 72 days, 6 hours, 11 minutes and 14 2/5 seconds after she had departed. He won an all-expenses-paid trip to Europe—for one.)

Bly’s glory was short-lived. After a stint on the lecture circuit, she had continuous fights with editors and moved with her mother to a farmhouse in the country to escape publicity and what Goodman calls “unpleasant talk.” Though she returned to journalism later in life, she was too famous to do the undercover investigative reporting at which she really excelled.

Bisland, in contrast, went to London to mingle in British high society. She wrote a series of articles for The Cosmopolitan on her journey, subsequently published as a book, In Seven Stages: A Flying Trip Around The World. She married a wealthy attorney who later became a utilities tycoon. Bisland’s 1929 New York Times obituary (“Mrs. E. B. Wetmore, Author, Dies in South”) failed to even mention the journey.

As for the record, Bly did hold the position of the fastest person in the world, very briefly. Four months later, on May 24, 1890, George Francis Train completed an around-the-world trip in 67 days.

Has America ever needed a media watchdog more than now? Help us by joining CJR today.
Daniel Luzer is web editor of the Washington Monthly.