If machetes (rise and) fall in Africa and no American voters are listening, do American politicians care? No, says history. “If every member of the House and Senate had received one hundred letters from people back home saying we have to do something about Rwanda,” a senator explained in 1994 after the United States stood by while 800,000 people were butchered in three months, “then I think the response would have been different.” No one wrote, and popular silence abetted official indifference. 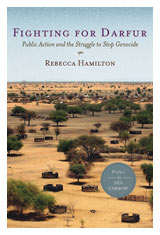 The Darfur lobby changed everything. In the summer of 2003, the government of Sudan and its proxies targeted non-Arab civilians in a region called Darfur. Hundreds of thousands would die, millions would be displaced. But this time, Americans would write, call, march, divest, and lobby in a coordinated multi-year campaign to change their government’s foreign policy. This was a dream come true for human rights advocates accustomed to political irrelevance: a genocide in faraway Darfur became a major issue in domestic politics. The Darfur lobby was born, as Rebecca Hamilton recounts in Fighting for Darfur, a history of American policy on Darfur between 2003-2010 and the mass movement that sought to direct it. Hamilton, a Harvard-trained lawyer and current Sudan correspondent for The Washington Post, knows the movement well because she was once among its leaders.

At the peak of its influence in 2006, the Darfur lobby, led by a sprawling coalition called Save Darfur, shaped American policy and priorities. It had loosened congressional purse strings (to the tune of hundreds of millions of dollars in peacekeeping costs and a billion dollars more in humanitarian aid), constricted Sudan with economic sanctions, and hounded President Bush to send peacekeepers. A White House staffer gushed: “We would meet with Save Darfur and tell them what amount of money was needed, then they would go [to Congress]… and come back with more!” Another administration official complained: getting 100,000 e-mails from activists on the first week of the job “pisses you off.”

The Darfur lobby even won the ear of a president. George W. Bush emerges as a surprisingly sympathetic, if constrained, character in Hamilton’s many vignettes. Early in his presidency, in the margins of a damning report on the Clinton administration’s response to the genocide in Rwanda, he writes “Not on my watch.” In a meeting with Darfur activists, he speaks of a universal “freedom from genocide.” Behind closed doors, he reads critical New York Times coverage and slams a table to demand more effective policies from his advisors. Publicly, he pushes for armed international protection for Darfuris: “There have to be consequences for murder and rape, which means you have to have a presence on the ground that can use force.” He even consents to an International Criminal Court investigation in Darfur, despite his deep-seated opposition to that institution, which leads to a landmark indictment of Sudan’s sitting president, Omar al-Bashir. Alas, Bush’s enthusiasm for saving Darfur withers in the shadow of his misadventures in Iraq and Afghanistan. Bush “very reluctantly” opts against another U.S. military intervention in a Muslim country, recounts a senior advisor. He then pins his hopes on NATO, and, later on, the UN—largely, it turns out, in vain.

Fighting for Darfur begins with a whirlwind tour of Sudanese history, and reminds us that Darfur is more than a vacuum where people go to die. Ethnic conflict dates back to the 1980s, when members of one African ethnic group warned, presciently, of a “Holocaust.” Sudan is the largest country in Africa and site of a brutal civil war between North and South that lasted between 1983-2005 and claimed two million lives. Darfur burned as a historic North/South peace deal was finalized and signed; the international community was forced to divide its attention between a burgeoning crisis and a separate peace within the same country.

How to explain the anomalous outpouring of American sympathy for Darfuris—black (!), African (!!), Muslim (!!!) Darfuris? Some claim that unprecedented social media makes faraway atrocities ever harder to ignore (dude, people are dying on my iPhone), and that the human rights community has cracked the code for political impact (ape the National Rifle Association, but for genocide). There is something to this, but certainly less than its proponents claim, as the muted response to the far-greater human toll in Congo demonstrates.

Rather, the Darfur lobby benefited from a perfect storm for advocacy. First, Colin Powell—responding, it should be noted, to savvy bureaucrats and his conscience, not activists—sparked media and popular interest in September 2004 by declaring that genocide was occurring in Darfur. The “G-word” stirred the first major wave of the Darfur movement’s true believers, including members of the Jewish community murmuring “Never again.” Second, the widely observed tenth anniversary memorials of the Rwandan genocide happened to coincide with the first year of the Darfur conflict. The mythology of international failure on Rwanda energized activists and elicited promises from politicians.

Third, congressional advocates for Darfur—Democrats like Donald Payne and Republicans like Sam Brownback—were easy converts to the cause, largely because a bipartisan group of legislators had already been engaged on Sudan issues since the 1990s. They had been drawn to the country because of its bloody civil war in the 1980s and 1990s, notably the plight of Christians in Southern Sudan. These same legislators pivoted to Darfur, where the same bad guys, Islamists in Khartoum, were killing new victims.

Finally, and perhaps most critically of all, the drawn-out nature of the crisis—some called it “Rwanda in slow motion”—gave political organizers years to gain momentum. Translating postcards into policy takes time, and activists had plenty as the killing and dying in Darfur dragged on and on. (By contrast, during the 1994 massacres in Rwanda, Clinton’s officials refused to utter the G-word, legislators could not locate the country on a map, the image of Black Hawk helicopters plunging in Somalia haunted officials thinking about intervention in Africa, and most Rwandans died in a mere three months.)

What role did the media play? Many editors eventually made Darfur front page news. Mass coverage enabled a mass movement (and vice versa), and journalists seemed as fixated by the G-word as activists. That said, Hamilton cites a study showing that in 2005 the major US television news networks devoted fifty times more news coverage to Michael Jackson than Darfur. The media was also silent during a “deadly 13-month lag” between 2003 and 2004, the first phase of the conflict with the worst fighting and aerial bombing.

The book has its weaknesses, most palpably on China. Incredibly, when it comes to the Chinese, Sudan’s largest oil customer and supposed linchpin of the geopolitics of Darfur, Hamilton does not boast a single source in Beijing. Overall, Hamilton relies primarily on interviews, not documents. Sometimes the reader must settle for anonymous opinions, and American officials tend to say they were doing their best. These are the perils of reporting contemporary diplomacy; it is opaque by design, and in the absence of credible fact-checking or Wikileaks we might unknowingly fall in the crevasses between public accounts and actual policy. Exhibit A: the CIA maintained extensive intelligence links with the Sudanese government even during the genocide. These shadows have eluded journalists and await more patient historians.

Not that Hamilton confined herself to talking with Americans—she does a remarkable job reaching key players on Darfur in the UN, International Criminal Court, African Union, Arab League, and Sudan. The result is the most comprehensive account of the international response to the Darfur genocide available.

Along the way, Hamilton introduces the idealists who dreamed of stopping genocide and their government officials who struggled to show them results. We also meet some improbable anti-heroes. Hassan Al-Turabi, the man who welcomed Osama Bin Laden into Sudan, later became a key leader in the Darfur rebel movement. Michael Gerson, the speechwriter who coined the “axis of evil,” stuck around for Bush’s second term to push the President to do more to help civilians in Darfur, pestering that earned him the epithet “conscience of the White House.”

The Darfur lobby was historic, but was it good? Its critics, including Mahmood Mamdani in his acerbic Saviours and Survivors, argue that an ignorant lobby is worse than no lobby at all, good intentions notwithstanding. Many activists did not bother to learn about the people they sought to save, and some leaders fudged details to keep it simple for their base and banners. The focus was ending killing rather than understanding Sudan. Hamilton suggests that American officials curtsied too deeply before activist demands at the expense of an effective whole of Sudan policy, notably a focus on the implementation of the North/South peace agreement.

It seems that Hamilton wants it both ways: she criticizes the U.S. government for ignoring Darfur in 2003-2004 as it focused on finalizing the peace negotiations, but she also sides with critics who say the U.S. later neglected the peace deal by focusing on Darfur. Perhaps the facts support her on both counts, but she might also be demanding that the U.S. government do everything, and do it better.

Overall, however, Hamilton thinks the Darfur lobby is a positive development, especially if it morphs into a permanent lobby against mass atrocity. Hamilton thinks the United States is capable of foreign policy that is effective and more human-rights focused, should its citizens demand it. Time will tell.

Hamilton concludes with a sobering assessment: the Darfur lobby was influential at home, but not effective for Darfur. Hamilton calls it a failure with a “silver lining.” Yes, humanitarian aid and the eventual deployment of international peacekeepers alleviated much suffering, yet a genocide was implemented with virtual impunity. Even an engaged superpower could not dictate terms to a ruthless regime flush with petro-dollars.

If the splintering of Darfur’s rebel movement and the meddling of neighbouring Chad and Libya made a peace deal difficult, the intransigence of the Sudanese state made it impossible. The U.S. and UN blinked when Sudan’s president promised to make Darfur “a graveyard” for UN troops. State sovereignty still means a great deal in strong states, even when a sovereign chooses to massacre his own people, and especially when that sovereign has the tacit support of China. President Bush seemed earnest in his desire to do more for Darfur, but he was tarred by Iraq and stymied by China. Hamilton concludes, “The tragedy of the advocacy effort is that the first sustained movement to pressure the US government to fight genocide and mass atrocity arose in response to a crisis where the US itself became less influential.” Or: nice try, but better luck next time.

Has America ever needed a media watchdog more than now? Help us by joining CJR today.
Andrew Stobo Sniderman is a Sauvé Scholar at McGill University and studied international relations at Oxford University as a Rhodes Scholar. He was, once upon a time, a leader in the Darfur lobby. His writings are collected at www.Stobo.ca. Tags: Darfur, genocide, George W. Bush, Page Views, Rebecca Hamilton, Sudan