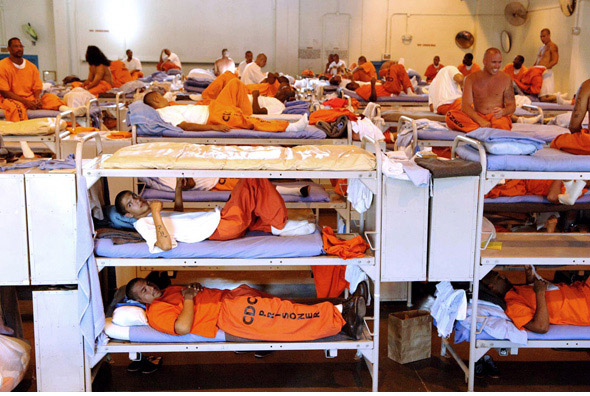 When Rob Wildeboer, a criminal-and-legal-affairs reporter for public radio WBEZ in Chicago, read a report from a local watchdog group about conditions in Illinois state prisons, he was taken aback: “The stuff that they were saying—if true—was just horrendous.” The report, and his own follow-up reporting, revealed vermin infestations so severe that a cockroach had to be surgically removed from a man’s ear. Hundreds of bored and restless inmates—some serving time for nothing more than driving on a revoked license—crowded dormitory-style into dank, flooded basements. Six hundred men sharing seven toilets. So Wildeboer did what any good journalist would do: He asked to see for himself. “I expected we’d get in, to be honest,” he says.

Instead, he found himself at the center of a yearlong standoff, during which the governor of Illinois, Pat Quinn, publicly issued blanket denials to journalists seeking access to the state’s prisons, and then refused to sit down with Wildeboer—or any other reporter—to discuss this policy or its rationale. It wasn’t until WBEZ, with the help of two pro bono attorneys, threatened a federal lawsuit that the governor backed down, and even then only partway. Tours would be allowed, he said, but no tape recorders or video cameras. “It’s a step in the right direction,” says Wildeboer.

Prisons are an abundant source of scoops and stories for enterprising reporters. Life “behind the walls” is rich with drama and moral complexity, and departments of corrections are as badly in need of journalistic sunshine as any other government agency. But to cover them is difficult. They are, of course, closed institutions, meant to lock some people in and keep others out. Reporters often “don’t know how to get access, or they’re refused access and they throw up their hands,” says Michele Deitch, a University of Texas law professor who specializes in prison oversight. Even those who can get in must navigate a complicated relationship with correctional administrators whose goals and needs are often at odds with their own.

The skyrocketing US incarceration rate is by now a familiar story. Thanks to “tough on crime” politics and the War on Drugs, almost one in every 100 Americans is in prison or jail, a rate that leaves even China and Russia in the dust. And lockup does not come cheap. The average state spends almost a billion dollars a year running its prisons. The growth of prison spending in state budgets outpaced every other expenditure except Medicaid, according to a 2009 study by the Pew Center on the States.

Compared to other areas that siphon significant public resources, such as healthcare, prisons get vanishingly little media attention. Ted Gest, a longtime crime beat reporter and president of Criminal Justice Journalists (a nonprofit dedicated to improving coverage of crime and law enforcement), guesses there are a half-dozen reporters across the country covering corrections, some of whom have other duties as well. “It’s never been perceived as that newsworthy,” he says. “Most prisons, unless there’s a riot going on, [are] just not considered that sexy.”

Still, it is hard to overstate the importance of covering prisons. For starters: 95 percent of prisoners—more than 600,000 people each year—eventually go home. What happened while they were inside—whether they received job training, adequate healthcare, or learned positive life skills, or whether they were embittered, recruited into a gang, or made connections in the criminal underworld—has profound consequences for the society they return to. And the ripples extend far beyond the prisoners themselves: Almost two million children have a parent in prison—to say nothing of inmates’ parents, spouses, and siblings. Half a million correctional officers work behind the walls.

Given this, “we want to make sure there’s accountability for the results of all this imprisonment,” says Jenifer Warren, a writer and editor in Sacramento who for more than a decade covered corrections for the Los Angeles Times. “If you’re going to use incarceration as a tool and response to crime, you want to make sure your money is being used wisely, and you’re getting a return on your investment. It’s billions and billions of dollars that could be spent on other things.”

To ensure accountability, the reporters who do take an interest in prisons need access. But policies vary widely from state to state. Some states are models of openness. In Rhode Island, for instance, journalists are not only allowed access, but are “encouraged . . . to visit correctional facilities and to report on programs and activities” as a matter of policy. And even the sorts of negative stories that have made prison administrators in other states wary of the press are there considered “a cost of doing business” in Rhode Island, according to Department of Corrections director A. T. Wall. “Most of what we do is behind walls and fences,” Wall says. “If we don’t make ourselves available to the media, don’t let people see a lot of what we do, we’re going to perpetuate a stereotype that we’re running dungeons.”

At the other end of the scale, according to freelance journalist Jessica Pupovac, who did a state-by-state survey as part of a journalism-school master’s thesis, are states like Arizona, Alabama, Georgia, Louisiana, and Michigan. Each allows occasional press access—Alabama’s Corrections Commissioner cited two recent occasions when the press was allowed to accompany the state’s Prison Oversight Committee on a tour—but in these five states’ written policies, openness, and transparency are “the exception to the rule,” says Pupovac.

Most states fall somewhere in the middle, allowing certain types of access but not others. California, for instance, does allow tours, but does not grant requests for interviews with specific inmates. Governor Jerry Brown recently vetoed a bill that would have allowed greater media access to prison—the ninth time a California governor has done so in the last 20 years.

Making the situation more complicated is the fact that the rules covering media visits are typically a patchwork of legislation, regulations written by administrators, and case-by-case decisions made by the wardens of individual facilities. Few states have official channels through which reporters can appeal if their requests are denied.

In the case of WBEZ, “we went through all the proper channels,” says Cate Cahan, the editor who worked with Wildeboer. “We want to do things properly.” WBEZ submitted to the press office a request to tour two facilities, and was dismissed via email. When the journalists appealed to the governor’s office, they were again dismissed, in one line. Stonewalled, Wildeboer did what reporting he could from the outside—interviewing inmates who had already been released—and the refusals themselves became fodder for his work. “It becomes a government story; it becomes a transparency story,” says Cahan.

After Wildeboer’s seven-minute story about lack of access aired in August, reporters began to pepper the governor and the Department of Corrections with questions. “Security comes first, and it isn’t a country club,” Quinn told reporters. There are, of course, legitimate reasons that prison administrators might be wary of the media. It takes staff time to guard the journalist, for one. And “it would be so easy for a journalist on a first-time tour of a facility to freak out about something,” says Michele Deitch. For instance, during the day, inmates are rarely confined to their cells; unwitting journalists may panic when they see dozens of inmates moving around freely between programs and dayrooms and meals. “Journalists need to be pretty damn educated before they go in,” Deitch says.

Leaving aside safety considerations, the people who run prisons are in a delicate situation with regard to the press. “In corrections, the bad news is bad news, and the good news can be bad news,” says Rhode Island’s A. T. Wall. For example, Wall says, he likes to showcase educational and other programs offered to inmates at his prisons “because they’re consistent with our mission to foster a successful transition back into the community.” However, “when we do attract media attention, there can sometimes be a backlash of people who are offended that taxpayer dollars are being spent that way.”

In extreme cases, public outcry can jeopardize the program. “The public could get very up-in-arms—They should be breaking rocks!” says Deitch. The coverage “could end up being really counterproductive if it’s not reported on in a smart way.”

Press policies are often crafted with extreme sensitivity to victims, an effort to avoid reporting that might be perceived as “glorifying prisoners” or giving individual inmates “celebrity” status. “I try to put myself in the shoes of a victim,” says Kim Thomas, the Department of Corrections commissioner for Alabama. “If I was sitting in my living room and the person who destroyed my family and my life all of a sudden appears on TV—I don’t want to be the commissioner who does that.”

On those grounds, Thomas declines every single press request to interview inmates. Rhode Island’s A. T. Wall has taken a different tack. “Sensitivity to victims, as my lawyers have reminded me,” he says, “is not a constitutional right.”

Meanwhile, journalists’ access to prisons is not a constitutional right per se, either. The courts have repeatedly held that journalists do not have any rights of access greater than that of the general public. Of course, they have no fewer rights of access, either. WBEZ’s threatened lawsuit homed in on that right to equal access. State prison officials “permitted school groups, church groups, the John Howard [watchdog group] all to have access to the prisons,” says Jeffrey Colman, one of the lawyers representing the station (John Howard’s reports prompted Wildeboer’s initial efforts). “I believe that’s the reason why the Department of Corrections caved in: because they knew that to give access to John Howard and not the media raised a significant equal protection claim under the Fourteenth Amendment.”

Reporters who find themselves barred from their local prisons, and who don’t have pro bono lawyers, still have options. “Prisons are functions of state governments, and state governments keep all sorts of records,” says Jenifer Warren. If you can’t get in, she says, follow the paper trail: state budgets, lawsuits, disciplinary proceedings, labor contracts, parole hearing transcripts, lobbying records, and state personnel board files—all are good sources of information. If you can’t interview current inmates, you can interview former inmates; talk to people who just got out, people on probation and parole, and their friends and family.

It’s worth the effort. Despite the human and financial reach of prisons, says Deitch, “What goes on in there is a complete mystery. It’s a leap of faith for the public. The role the press can play is to keep that light shining on what’s going on in prison facilities. They make sure that we get the prisons that we want and we deserve.”

Has America ever needed a media watchdog more than now? Help us by joining CJR today.
Beth Schwartzapfel is a Boston-based writer who often covers the criminal justice system