It was a little before five last Wednesday evening when the “tall Mormon” walked into Antarctica, a bar in lower Manhattan (“where the drinks are big and the memories are short”). “Oh, you’re the tall guy,” David Plotz, Slate magazine’s editor, said to him. “Our tall Mormon.”

The tall Mormon had had apparently spoken to Plotz earlier and promised he’d bring four other good-looking Mormons to the event, which was a happy hour with the cast of Slate’s popular podcast, Political Gabfest. Plotz co-hosts the weekly podcast with Emily Bazelon, a senior editor at Slate, and John Dickerson, chief political correspondent at Slate and political director at CBS. 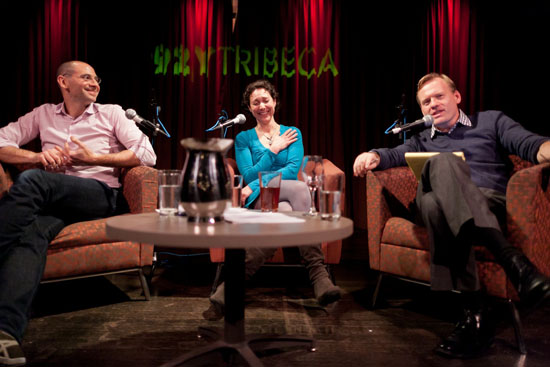 The session cost $25 plus the drinks (the Mormons abstained, naturally), and offered podcast fans a chance to mingle with the Gabfest hosts before they recorded their live show later that night, at the 92nd Street Y Tribeca. Thirty people bought happy hour tickets, most of them young, urbane men.

The notion of a political podcast from an online thought magazine may sound a bit nerdy and, to the tech-savvy, maybe a little antiquated. But since launching in 2007 2005, Slate’s Political Gabfest has grown an audience of 75,000 weekly listeners, including a dedicated community of active listeners who do things like post long, thoughtful, meaty comments or attend $25 happy hours or fly from Alaska to Grinnell, Iowa, in December to attend a live Gabfest. (Others drove from Kentucky and a class of Minnesota high school students bussed in for the occasion.)

The Gabfest has one of the most thoughtfully engaged audiences I have ever encountered online. After Plotz wondered on last week’s show whether there was any connection between religiosity and family size, for example, two separate political scientists looked into the question and sent him their analyses; meanwhile, a PhD student in statistics, after “playing with some GSS data,” posted his own findings on the podcast’s Facebook page. (A Google search turns up evidence that a number of political scientists are avid listeners). “I don’t think we deserve our fans most of the time,” said Dickerson.

At a time when most media organizations are trying to connect with and grow their audiences through social media tools like Twitter and Facebook (more followers, more likes), Slate has taken a more boots-on-the-ground approach by building communities around several podcasts and drawing them to live shows and happy hours, as well as an active Facebook page. This strategy focuses more on building the strength of ties with members of the audience than on the number of them. (The Political Gabfest is the most popular of Slate’s thirteen podcasts, though not all of them are regular).

H
ere is where I should make an admission: I love the Slate Political Gabfest. I started listening to it when I lived abroad and was looking for news on the 2008 election. I don’t think I’ve missed a show since, and while I listen to most of Slate’s podcasts, I particularly like the Political Gabfest. It downloads to my computer late each Thursday night, and once I listen, the number of days until the next gabfest is something I’m conscious of. On occasion, I have resorted to listening to past, no-longer-relevant episodes for lack of fresh ones.

The format of the show is a discussion of three topics—last Wednesday for example, the hosts tackled the state of the Republican race; the idea of a third party entering American politics; and Stephen Glass, the ex-journalist and ostensibly repentant fabricator, and his battle with the California bar to get license to practice law. The format ends with a final “cocktail chatter” segment, in which each host volunteers some bit of miscellany.

Though it is (broadly) a political analysis show, the Politcal Gabfest sometimes makes me laugh out loud. There was one evening last summer where I was that strange person on the subway, giggling maniacally, unable to stop as I listened to the show. The conversation had turned to dogs and mimes. You had to be there.

But more than its entertainment value, the Gabfest helps me to think about things in new ways, and has even shaped the way I think about politics and arguments in general. Rather than a narrow discussion, the Gabfest excels at framing and contextualizing issues more broadly. The Stephen Glass conversation, for example, was less a about Glass than it was about the regulation of professions and the limits of rehabilitation in society.

I’ve always found my attachment to the show and its hosts’ on-air personas—David, the cantankerous, panda-bashing contrarian; John, the rambling, poll-loving square; and Emily, the legal expert of many minds and digressions—to be a little weird. So I was glad to find at Antarctica (and later at the 92nd St Y, where there was a sell-out crowd of 250) I am not alone.

At the bar I met Andrew, a 28-year old PhD student in sociology, who compared his relationship to the show to a “friendship.’”And Ross Gottesman, 29, who works in real estate, blogs at brief-wit.com, and has attended cocktail hour with the Gabfesters before (he says he has also sent them headline ideas, including this one). Ross said spending time with the Gabfest hosts is “like seeing a European football star in America. No one recognizes them. But I really respect them for their incisive and interesting conversations.”

It’s reactions like these that have made podcasts and building communities around them “part of a real strategy at Slate,” says Plotz. “We think that this audience and this way of connecting to an audience is incredibly valuable.” It was the success of the Political Gabfest that inspired Slate’s other podcasts, he says—on sports, culture, women’s interests, digital manners, language, and other subjects, with generally smaller but loyal fan bases around them. “We’re building distinct communities that are the diamond center of the Slate audience. We know these folks are our best readers and our best fans.”

They learn from them too. Plotz says the hosts get lots of ideas for the show and for Slate in exchanges with the live audiences at happy hours and gatherings. They also seem to have fun.

C
onversations at the cocktail hour ran the gamut: The tall Mormon and Dickerson talked basketball and George Romney; Bazelon discussed her work on bullying and movies that were appropriately non-violent for her son; later Dickerson talked about the logistics of headlines and the prospects for reform of the caucus system.

Interviewing the three Gabfest hosts was a lot like listening to them on air. They joke, interrupt each other, and digress. There is a fluidity to their conversation— they throw out elaborate, organic analogies (see this show, for analogies of Republican candidates to houses)—and share a natural rapport that was established a couple years before the show, when they began working together at Slate.

When the show launched, Dickerson was supposed to host the program alone. Slate’s executive editor, Andy Bowers, envisioned a podcast that would feature conversations like those that occur over drinks, not those that broadcasters have on air, and while he had imagined a rotating set of guests, Plotz and Bazelon started out and had such a good time that they “just kept going.”

This on-air chemistry explains a lot of the show’s following. “I don’t think we have the best political analysis in the world,” says Plotz. “John is a really good political analyst; Emily is a really great legal analyst; I bring nothing to the table. I didn’t realize that the fact that we were friends and the fact that we just sort of bash each other around and be playful with each other is what made the difference.” (Throughout the conversation Bazelon and Dickerson rolled their eyes at Plotz’s multiple assertions that he was the groups “intellectual weak link.”)

The trio says they don’t rehearse for the show; they say they do the opposite, by avoiding certain conversations before they go on air (this is unlike the other Slate podcasts, which are more carefully scripted and produced). Dickerson likens Gabfest conversations to story meetings or “puzzling out something” in public. “We all feel very comfortable not being sure of an answer and working things out,” adds Bazelon.

Needless to say, this is a much different approach to political punditry than one tends to get on TV and talk radio. (It’s also less ideological.) Dickerson thinks Gabfest listeners appreciate that. “Occasionally we’ll get people who are angry at us for not having all the facts figured out, but in fumbling to a conclusion, more people appreciate it than are offended. You can kind of rumble around in an idea; you don’t have to be so careful about not looking bad or getting something wrong. And it gets you more creative, insightful results.”

Likewise, the hosts agree that their varying expertise leads to a sort of ‘cross-fertilization’ in their conversations that helps free them from thinking within the narrow frameworks of their fields. Bazelon says that helps her think more deeply about the set of assumptions she works with in the legal world; similarly, Dickerson says it helps him “think afresh” about things political junkies tend to take for granted. “Asking interesting questions is something you can become deadened to in political stuff—a lot of time it feels like a tennis match.”

While some media companies seem to be moving away from podcasts, Dickerson, for one, thinks they have unique value: “There’s something about the podcast format that’s intimate and that’s different than a radio program or television. It’s personal, on your time, in your head.” (According to Plotz, they’ve found advertising rates for audio podcasts are actually higher than for most video because of this; Audible, Bing, Carbonite and Stitcher have been among the show’s sponsors).

Slate has no plans to take the Gabfest to video format; Plotz contends that transition is a mistake that been made my too many media outlets before. “There is a lot of questioning about podcasts right now—part of it is the name is terrible,” says Plotz. “But part of it is that I don’t think others have figured out the formula in the way that we figured it out. We lucked into it, but personal connection combined with really strong contact and the sense that you a participant in a conversation is special.”

It worked for me. And the live show at the Y was a lot of fun. You can listen to it here.

Has America ever needed a media watchdog more than now? Help us by joining CJR today.
Erika Fry is a former assistant editor at CJR.