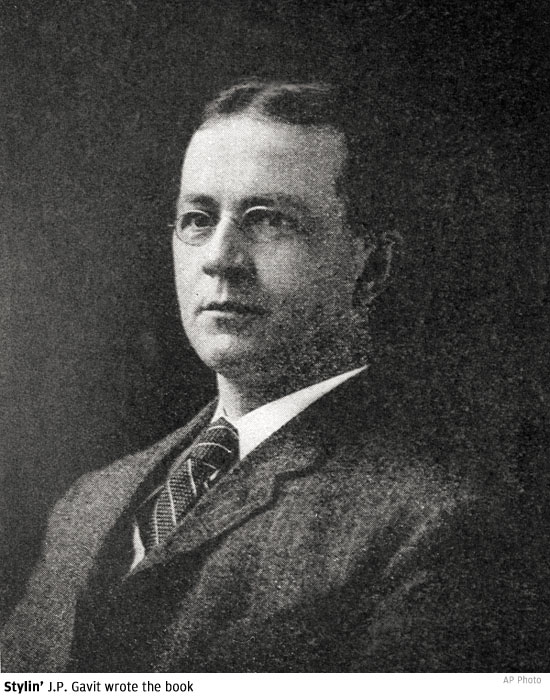 The Associated Press has always maintained that its first Stylebook - the essential reference bible for professional journalists - was published in 1953. “Sixty pages,” they say, “stapled together.”

But this isn’t exactly true.

Actually, there were hundreds of pocket-sized “circulars” distributed to correspondents for at least a half a century before that. Some focused on writing style, others on “rules and regulations.” There was even one about how to file telephone reports. It’s unclear how many of these pamphlets were actually seen by reporters in the field, however, or how closely their scattered guidelines were followed.

So an enterprising correspondent named John Palmer Gavit, who covered the state capitol at Albany from 1902 to 1909, decided to take matters into his own hands. His richly detailed publication, The Reporter’s Manual: A Handbook for Newspaper Men, was begun in the early 1890s and took 12 years to complete. It was finished in 1903, one year before Gavit was named Albany bureau chief, and is now the earliest known and most complete guidebook for reporters; a book so forgotten that even the AP’s own archivists hadn’t heard of it.

Gavit’s work is a forgotten bit of history that reveals much about early “newspapermen” and how they saw their place in the world. Like the modern Stylebook, it offers dictionary-style entries on what topics journalists should and should not cover, why, and how. His advice is for the “all-round, general utility chap,” he says. The lone reporter freshly “flung out into deep water to sink or swim as best he may, with little comfort or counsel from his elders.” His aim is to offer guidance to the overwrought correspondent who must, “for 365 days in the year… find news in the passing crowd, scoops on the street corners, copy in everything.”

The manual’s introduction is written by fellow AP reporter George Edward Graham, who was best known for documenting the Spanish-American war from aboard the USS Brooklyn.

“Mr. Gavit has filled a long-felt want in issuing this little book of instruction,” Graham writes. “In the last ten years there have been written less than five books on newspaper work,” and all of these “of a voluminous character and rather bewildering.”

“Could I have had such a book at hand in my ‘cub’ newspaper days,” Graham continues, giving Gavit’s work undeniable credibility, “my progress would have been far more rapid…[than] struggling alone day by day with many blunders and bitter experiences.”

In reading the manual, one is struck by how little the basics of good journalism have changed.
There are but two Golden Rules: “Never betray a confidence” and “never deliberately pervert or misrepresent facts.”

Accuracy is more important being “brilliant and elegant,” and there is even an entry for “Mare’s Nest,” which begins with the simple words, “Keep cool.” For even the most “thrilling rumor” will usually dissolve under investigation, writes Gavit, and the reporter who keeps his head at such times will avoid “eating crow” tomorrow.

He advises reporters to have a telephone, “in your house if you can,” and “at least one friend in every neighborhood, and among each class and nationality of people (e.g. miners, railroad men, college students).” Correspondents also need a blank book, he says, with the names of “local officers, justice of the peace, coroner, postmaster, station agent, ministers, lawyers, undertakers, doctors, teachers and others upon whom you may call in a pinch.” This list is like a “mine of diamonds…. The man or woman whom you met two years ago and forgot, but whose name is in your book, may be the very one who will save the day. Not one, but twenty, first class scoops were the fruit of this absurdly obvious device.”

And what may have been a striking precursor to the indispensible AP Daybook, Gavit advises reporters to keep a “Date-Book” of important events. “Every fellow has his own ideas as to the system of preserving and classifying material,” he writes. “Suit yourself on this point, but have some system.” In the absence of a paper, the enterprising reporter will use “his cuffs, shirt bosom, the fly-leaf from a book, a box cover, piece of board or shingle.”

But for all its similarities to newsgathering principles of today, the 1904 book also reveals how radically our cultural norms have shifted. In Gavit’s time, murders were to be covered only briefly, “unless accompanied by unusual circumstances.” A prescient tip for local television stations everywhere. Rapes and abortions on the other hand, were not wanted news at all “except when the victim of the latter is well-known and dies, or the perpetrator of the former is pursued and lynched by a mob.” (Interestingly, by 1911, a much briefer “circular” had eliminated Gavit’s reference to lynching and mentions only a “mob.”)

When the jury returns to a courtroom with a decision you may find yourself “hemmed in by the crowd,” Gavit warns. In such cases, correspondents should signal from the window to a trusty messenger across the street: “one, two or three motions of a handkerchief” to quickly relay the verdict of “guilty,” “not guilty,” or “jury disagrees.”

Along with routine, everyday murders, Gavit’s list of unwanted subjects found on the last page of the book, is exhaustive:

Do not send incest cases, elopements, seductions, infanticides, or scandals of any kind; injury or death of employees of railroads while coupling cars, switching, etc.; injury or single death by farming or other machinery, or by horses running away, or at railroad crossings, or on railroad tracks; ordinary suicides of persons known only in their city, town or county; death of old settlers or individuals, unless having at least a State reputation; single drownings; changes in the temperature, or about frost; snow, hail or rain, except where there is loss of life or great damage to property, or railroad trains are stopped and travel interrupted; announcement of candidates for office of any kind, except when called for; organization of political clubs, etc.; crop reports, or crop conditions; social events or marriages, unless ordered; base ball and foot ball games, horse or bicycle races, unless ordered; common accidents to man or beast; sporadic cases of infectious or contagious diseases, such as small-pox, diphtheria, etc., or of diseases which affect animals; petty crimes; movements of prize-fighters or their managers or trainers, unless ordered; libel suits, suits for infringement of patents, copyrights, trade marks, etc.; damage suits against individuals, firms or corporations for injury, death, etc….

The final item on that list, interestingly, is “editorials on political subjects.”

Gavit’s wit is sharp, and he has little patience for the reporter who fails to make his best effort. In a private letter dated April 3, 1915, Gavit, who was by then managing editor at the New York Evening Post (he also served as the AP’s Washington, DC, bureau chief from 1909 to 1911) roundly admonishes an underling, Harold Phelps Stokes, the paper’s Albany correspondent:

I don’t know when I have seen a bunch of newspaper correspondents so fast asleep as the bunch at Albany. Nobody, not even the correspondent of the Evening Post seems alive to his job.

Poor Stokes would later enjoy a long and successful career, including more than ten years at The New York Times, and he and Gavit would remain friends well into old age. But at the time of this letter, Stokes was a 28-year-old rookie who knew nothing about covering state politics. Gavit’s job was to whip him into shape:

Here is the rottenest Legislature that has been there in my time, yet the only newspaper writing that has been done about it, that amounts to three hurrahs, is in the editorials written by poorly-informed men in New York City. What I am looking for is some stuff from you worthy of at least a 51 head on the first page…For God’s sake, go to it!

Has America ever needed a media watchdog more than now? Help us by joining CJR today.
Kristal Brent Zook is an associate professor and director of the M.A. Journalism Program at Hofstra University. She is the author of three books including I See Black People: The Rise and Fall of African American-Owned Television and Radio.