Fifteen miles north of the National Palace in Port au Prince, along Haiti’s azure coastline, is a place called Titanyen. From Kreyol, this name translates to something like “less than nothing.” Titanyen feels practically barren, mostly dusty hills with some farmers herding animals. On one of these hills looms a large cross with strips of black cloth tied to it. These rags flap in the breeze like a murder of crows, memorializing the victims of the 2010 earthquake who are buried at the spot in mass graves.

The dirt at Titanyen today is undisturbed and covered in thick brush. There’s no trace of the bodies, widely photographed by the media and shown around the world, being bulldozed into ground. The process of clearing the dead from the streets was chaotic and rushed, and as a result no one knows exactly how many are buried there. The Haitian government, as reported by Time in January 2010, says as many as 150,000 were buried at Titanyen. 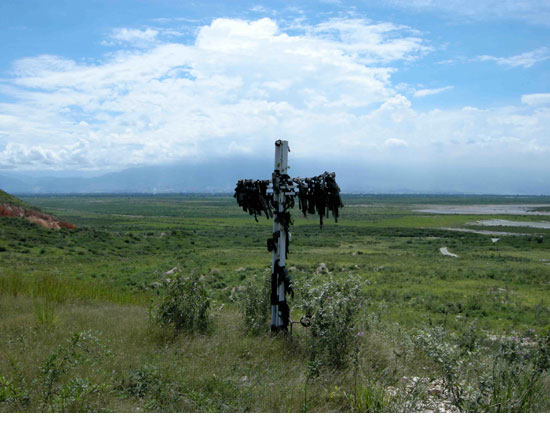 The official death toll of the quake is 316,000, according to the Haitian government. It’s a number that was arrived at mysteriously. In the first year after the quake, the government had set the death toll at 230,000, and the media and NGOs widely repeated the figure. On the first anniversary in January 2011, the 316,000 number was made official without explanation by then-prime minister Jean-Max Bellerive. Some viewed the revision as an effort to ensure the international community’s pledged reconstruction funds did not dry up.

The story around Haiti’s earthquake death toll has only grown murkier and more controversial in the last year. In October 2010, a report was published in the journal Medicine, Conflict and Survival that estimated the probable death toll at 158,000 people. It received little media coverage. In May 2011, Agence France-Presse received a copy for an unpublished report originally commissioned by the United States Agency for International Development, which suggested the number might possibly be as low as 46,000.

But journalists have continued to report the official Haitian government numbers as fact without acknowledging these dissenting views. Undoubtedly, debating the specifics of death tolls can feel distasteful and even disrespectful. But how the media reports those numbers—whether in the context of natural disasters such as the quake in Haiti or conflicts such as Iraq, Darfur, or Sri Lanka—is critically important. Such reports can and do influence policy, public perception, and, as a result, people’s lives.

In particular, the story of how the USAID report came to be and the controversy it has created is a study in why numbers aren’t infallible facts. On the contrary, they can be political tools. They can be emotional. And they can obscure the truth.

In the fall of 2010, USAID approached a Washington-based consulting firm to carry out a study. The agency wanted to know how its rubble-removal projects—on which USAID had spent $100 million—improved Haitians’ ability to return to their homes. A team from LTL Strategies, an international development and business-consulting firm, spent six months designing the survey and the methodology.

The team randomly chose fifty-five control points around Port au Prince. From December 17, 2010 to January 29, 2011, they went to each of them and interviewed nearly 2,000 residents, asking them a series of questions about where they went after the earthquake and their current living situation. The team found was that rubble-removing projects helped anywhere between 34,000 and 56,000 Haitians—an estimated 10 percent of the total displaced population—return to their homes. They also found that as many as 629,000 people were still living in houses that could collapse in bad weather or earthquake tremors, and another 217,000 people were living in buildings that could collapse at any time.

In the process of collecting this data, the researchers inadvertently discovered other numbers, ones that they had not necessarily set out to find. When they visited a home they had to ask who lived there before the quake and lived there now. Any discrepancies needed to be explained. Were there people living in a camp? Had a family member moved to the countryside? A different home? Or were they not there because they had been killed in the earthquake? In cases of completely empty houses, the researchers went to neighbors for this information.

In the aftermath of the earthquake, all affected buildings had been structurally evaluated through a USAID-funded program and were given a color-coded ranking. Green meant the building was safe, yellow meant it needed repairs, and red meant it was uninhabitable. By January 29, the team had collected data that gave them an average number of deaths for these three categories of buildings. They then extrapolated those numbers for the earthquake-affected population of 3 million. Based on those calculations, the report estimated 46,190 to 84,961 people had died in the quake.

The LTL Strategies team was led by anthropologist and statistician Timothy Schwartz, who received his doctorate from the University of Florida in 2000. Schwartz has lived in Haiti on and off for nearly twenty years, and his work in the country seems to often end up slaughtering a sacred cow or two. His doctoral dissertation, “Children are the Wealth of the Poor,” challenged the popular accepted notion of child slavery in Haiti, which Schwartz believes has been grossly misunderstood and exaggerated by NGOs who profit from the issue, as well as journalists seeking sensational stories.

Schwartz’s 2008 book, Travesty in Haiti: A True Account of Christian Missions, Orphanages, Fraud, Food Aid and Drug Trafficking, criticizes aid agencies such as Catholic Relief Services and World Vision, arguing that international aid to Haiti is rife with fraud, greed and political agendas. When it was published, Paul Farmer, the respected medical anthropologist and doctor, said the book “knocks it out of the park.”

According to Schwartz, the methodology and findings of the report met with approval inside USAID. “First time I went in, I went with general info. I said, ‘By the way, here’s what we got for death count and here’s what we have for people who came home.’” USAID sent the report to Washington in February 2011 for deliberation. When Schwartz was called back in, the report had been vetted and approved. The last time he walked out of USAID’s offices, Schwartz told me, everyone was happy. The final report was submitted to USAID on March 13. Once there, however, it lingered for months.

Schwartz said he did not leak the report, but he did share it with friends and other professionals during this period. (Some have accused USAID of leaking it in an attempt to discredit the Haitian government.) AFP got hold of it and published its findings on May 27, at which point USAID in Washington distanced itself from the study’s methodology citing “inconsistencies.” Meanwhile, USAID Haiti’s mission director, Carleene Dei, issued a statement that said: “Any comment on the death toll of the tragic earthquake of January 2010 that affected so many is beyond the scope of the commission and purely reflects the views of the author.”

“It was logical, and the methodology was good, but the big thing was the politics,” said Schwartz. “They said, ‘We’re going to shut it down because the report wasn’t representative.” In his opinion, USAID knew that the numbers in the report would cause a quagmire for both the American and Haitian governments as well as the international development community. If there were fewer deaths, less rubble, and fewer people in the camps, as the report claimed, what was happening to the billions of dollars being spent in the country? Why was the recovery and rebuilding effort so marred by gross inefficiency and corruption?

Schwartz arrived at our meeting in Port au Prince on his motorcycle, full of enthusiasm to talk about the report and the issues it raises. I couldn’t help but think he had the fatigued look of a lone crusader. Schwartz has been called a “liar” and a “despicable vampire” online by people who believe the report hurt Haitians. “People will die because of this criminal’s report,” wrote Michael Collins on his popular website, Haitian-Truth.org. Schwartz’s reputation as a virulent aid-hater in a country where foreign assistance makes up at least half the national budget and there are hundreds of aid groups operating has only solidified since May.

Schwartz expressed frustration that the issues the report raises have been seemingly buried in order to serve what he sees as the interests of the development community in Haiti. And the media? “The press is perhaps even more guilty than the aid groups,” he said.

After the report was leaked in May, the Associated Press, The New York Times, the BBC, and NPR each reported on the story, if somewhat cursorily. Foreign Policy published a piece by David Rieff which argued that while it is understandable that NGOs, governments, and the UN feel they must exaggerate crises in order to attract attention and money, “we are raising the bar to impossible heights. At this rate, the 46,000 to 85,000 Haitians Schwartz estimates to have died in the earthquake will seem too small a number to really command the attention of donors and the general public in the developed world.”

Since this initial spate of media attention, journalists have continued to report the Haitian government’s death toll of 316,000. In December, both a New York Times story and an AP story used 300,000 without citing the Haitian government as the source of their information. (In November 2010, I myself used the 300,000 number in a story for CJR.)

Arguably, the most meaningful contribution to the coverage to date didn’t come from a journalist. In July 2011, the Los Angeles Times published an opinion piece written by the two authors of the study published in Medicine, Conflict and Survival in October 2010. Robert Muggah and Athena Kolbe gave a systematic explanation for why they believed Schwartz’s numbers to be an underestimate (the two authors pegged the death toll at 158,000) but made a succinct argument for why accuracy matters:

The science of measuring mortality and morbidity is controversial. There are bitter disputes among groups of researchers who study death tolls in the world’s hot spots. Many governments would also prefer to discreetly avoid any discussion of the civilian costs of war. Yet the numbers matter. They can influence political responses to armed conflicts, famines and natural disasters. Statistics are routinely used to draw attention to evidence of systematic human rights violations and even genocide.

In Haiti, they wrote, the risk is that those wishing to justify reductions in aid will advocate lower figures, while Haitian officials and relief groups will advocate higher ones. Somewhere in between, the truth—and perhaps a better response to the tragedy of the earthquake—has been lost.

Correction: The original headline to this piece was “One Year Later, Haitian Earthquake Death Toll in Dispute.” Of course, the earthquake happened two years ago, not one year ago. The headline has been fixed. CJR regrets the error.

Has America ever needed a media watchdog more than now? Help us by joining CJR today.
Maura R. O'Connor is a freelance foreign correspondent. This year she was awarded a Phillips Foundation Journalism Fellowship and will be reporting on American foreign aid from Haiti, Afghanistan, and Africa. Tags: death tolls, earthquake, Haiti, international aid, USAID