On ABC World News with Diane Sawyer on June 3, she asked a question that many of us are wondering: If “climate change is somehow creating a lot more tornadoes than usual.” Then, she surprised many by explaining that tornadoes are actually down this year, with just 478 so far, while the average number of tornados for this time of year is 850. 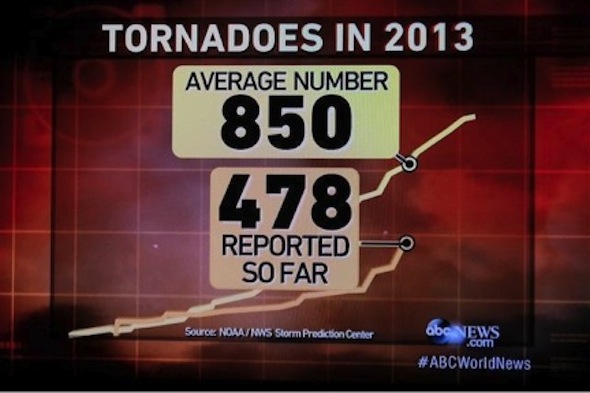 This raises the question of why we seem to be seeing so many more of them. The answer, of course, is because hurricane coverage has shifted from news to reality TV—and according to data compiled by TV news data expert Andrew Tyndall, the folks at ABC are driving the trend.

While all of the networks have increased their coverage of weather stories in recent years, ABC alone has given a single reporter, Ginger Zee, a beat to cover “Extreme Weather,” promoting her background in storm chasing rather than fact-driven meteorology. Compare that to NBC’s Nightly News with Brian Williams, who relies on the trained professionals from The Weather Channel, or CBS Evening News, which counts on Florida TV meteorologist David Bernard, credited as the network’s “severe weather consultant.” Only ABC has a reporter in the field, focused entirely on being where extreme weather is happening.

Tyndall says that there has always been an interest in extreme weather. “Think of wildfires and hurricanes, as well as tornadoes.” Looking at the coverage of natural disasters and weather stories, Tyndall says, “Things are definitely on the upswing since 2005—the year of Katrina.” 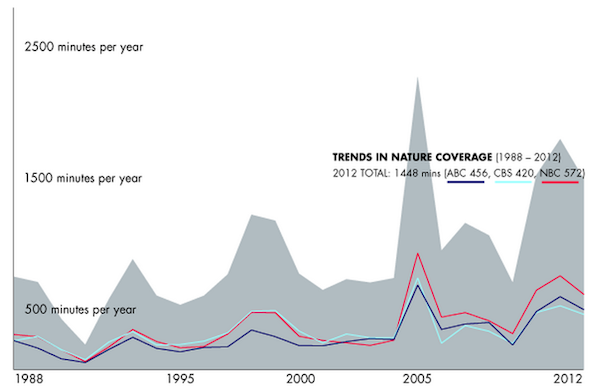 Tyndall points to changes in technology that are providing access to more video content. “I would ascribe that [coverage increase] to improving video technology—lighter, more portable cameras, more mobile uplinks for professionals, plus an abundance of amateur video via cellphones,” he explained. The result is a confusing muddle for viewers as the urgent tenor of coverage increases even as the number of storms declines. 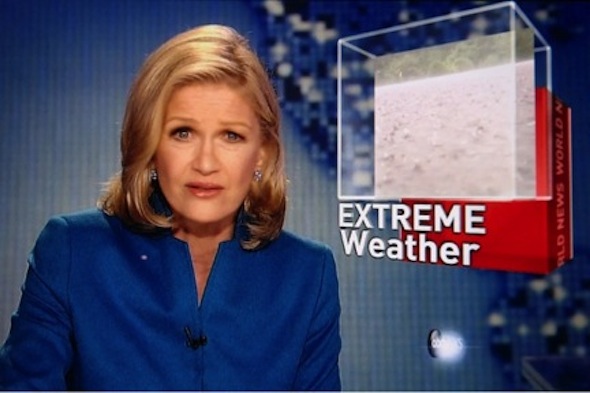 Tyndall has numbers to support the idea that ABC’s weather coverage is moving more toward the the telegenic drama of weather and away from reporting on weather’s link to climate change. The network hired Zee in November 2011 and then launched the Extreme Weather Team, which she leads. Though ABC’s weather coverage is officially led by Sam Champion—who is touted by ABC as being “at the forefront of reporting on the environment and climate change”—Zee’s airtime has been increasing significantly. Tyndall ranks Zee in the top 30 correspondents based on minutes of airtime, and her star is rising, with her reporting featured on both ABC World News and Good Morning America. Extreme weather coverage is the reason why.

“Sam Champion is less hesitant to report on the link between extreme weather and climate change than Ginger Zee is,” says Tyndall. “She sees herself as a meteorologist, not a climatologist … As for Zee, she is a weather pornographer.”

There’s little doubt that Zee and her role as the lead reporter on the Extreme Weather Team is pushing ABC’s coverage into the realm of reality TV. With 83 stories, according to Tyndall’s data, that made air for her “Extreme Weather” coverage since her hiring, virtually none of them explored what is causing these weather events. In the same time period, ABC broadcast just seven stories on global warming.

One reason why ABC’s weather coverage may be so light on science and so heavy on action adventure is that Zee, 32, spent most of her weather career as a ‘storm chaser,’ including a stint on the Discovery Channel’s reality show of the same name. She has a degree in meteorology from Valparaiso University, where she was a member of the school’s Storm Intercept Team, which observes extreme weather in realtime. 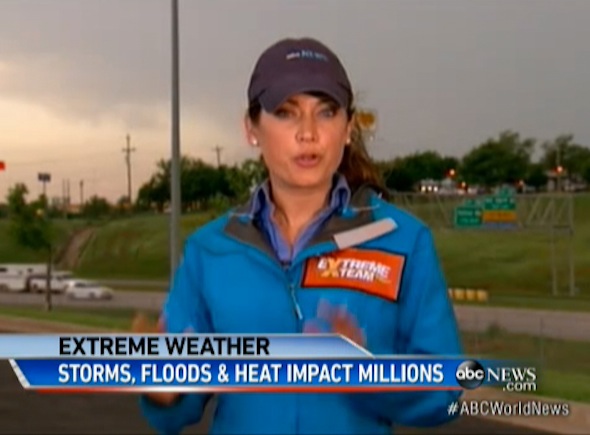 While climate change experts like Craig Brown, founder and director of Common Dreams, have no doubt about the underlying impact of our changing climate, they say the media is doing little to make the issue clear to its audience. “We just passed the 333rd consecutive month of global temperatures above the 20th-century average. Climate scientists now say it’s growing worse faster than any of them predicted even a few years ago. And yet, US press coverage of climate change is actually down from its peak in 2007,” said Brown.

The disturbing conclusion is hard to ignore. Sensational storm coverage makes ratings, while coverage of climate change is complex, scientific, and often controversial.

Until early June, the trend toward adrenaline-driven coverage seemed likely to rise even if the number of storms was on the decline. But then, tragedy struck. Tim Samaras, Carl Young, and Samaras’s 24-year-old son, Paul, were killed during an Oklahoma storm while filming Storm Chasers. Their death, and Zee’s close personal and professional relationship with them and their Discovery series, has begun to raise serious questions about the line between the adrenaline-fueled world of Storm Chasers and the more serious worlds of science and journalism. It seems to be a line that’s become dangerously blurred.

But unless trends change,Tyndall’s data says that this year, ABC will feature the most extreme weather ever for the network, potentially double the 2012 minutes logged. That as the larger subject of climate change remains, according to his data, essentially unreported.

Has America ever needed a media watchdog more than now? Help us by joining CJR today.
Steven Rosenbaum is the CEO of Magnify.net, the Web's largest video-curation platform. In 2011, he was named New York City's first Entrepreneur at Large, and in that capacity he works to bring more startups and engineering talent to the city. He is the author of Curation Nation (McGraw-Hill, 2011) Tags: ABC, ABC News, weather