Juan William’s abrupt firing from NPR and hiring by Fox News seems to have kicked up an old debate over whether public radio should still receive federal funding. The Corporation for Public Broadcasting has funded public radio since its creation through an act of Congress over forty years ago. In the past week, Sarah Palin, Mike Huckabee and Newt Gingrich have all said that this policy should be re-examined.

This morning, MediaBistro alerts readers to a new poll by Poll Position, showing how divided Americans are on this issue: 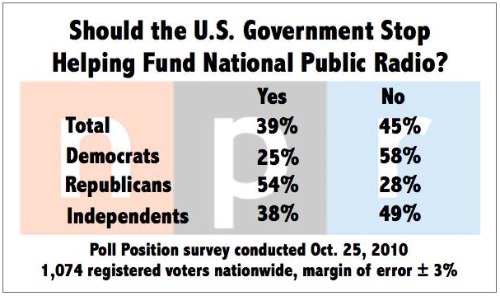 It’s important to keep in mind, when writing about this issue, that NPR actually receives a lot less money than people might think it does (a fact drummed into listeners’ heads every time a membership drive comes along). The NPR website is quite clear about the organization’s sources of funding, and the past few years’ financial reports are available for download there.

Here’s the chart for NPR’s individual member stations: see that direct funding from Federal, State & Local governments made up only 5.8 percent of the stations’ revenue in FY 2008. The Corporation for Public Broadcasting (CPB) contributed another 10.1 percent, but even if you add those up, that’s still only about 16 percent of the stations’ funding coming directly or indirectly from government sources. 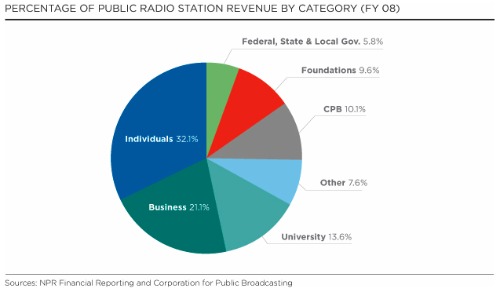 And here’s the breakdown for NPR itself, for FY 2005-2009. NPR is funded in large part by the fees that the member stations pay it for the right to play NPR programs (like Morning Edition, All Things Considered, etc.) and by corporate sponsorships. NPR actually does not receive any government funding for its operations costs. 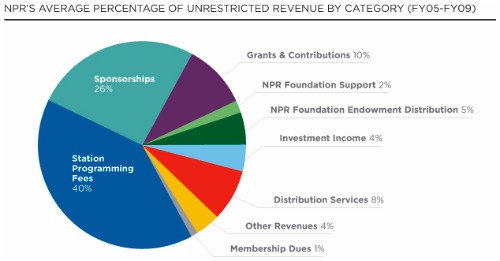 As with any hot topic, it’s easy to get swept up in the hysteria, so it’s that much more important to anchor the discussion with the raw facts. Opinions are controversial; facts are not.

Has America ever needed a media watchdog more than now? Help us by joining CJR today.
Lauren Kirchner is a freelance writer covering digital security for CJR. Find her on Twitter at @lkirchner