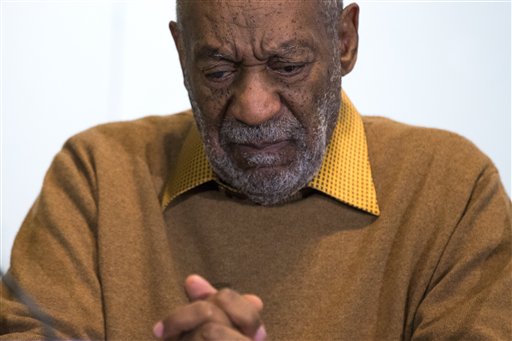 It is a remarkable thing to see: The collapsing reputation of a star who has been part of American life for more than half a century. A month ago, Bill Cosby was a comedic and sociological icon; now his career is in shambles. A Netflix special on him will not be shown; NBC won’t move forward with a proposed sitcom. And after 10 years when the media largely ignored on-the-record allegations from women who claimed that the star had drugged and sexually molested them, journalists are finally waking up. Indeed, as the coverage reached a fever pitch earlier this week, new developments were posted on the two twin pillars of our media age: The lead story in both the Drudge Report and the homepage of The New York Times.

The allegations aren’t new—10 years ago, they were featured prominently on The Today Show, and People ran a substantive report in 2006 that the magazine said was based on the stories of five women, three on the record. In this era of digital news, stories aren’t supposed to get lost. But in this case, the lack of interest of other mainstream operations — and their tacit agreement to allow Cosby to promote himself in their pages and broadcasts without asking him questions about the allegations — kept his career alive, and poised for a comeback.

The hows and whys of the rape allegations’ revival — and the media’s role — will be discussed for a long time. One flash point was a new biography by former Newsweek editor Mark Whitaker. The book doesn’t mention the allegations, and the omission caused a stir on some corners of the Web. Eventually it turned into a counter-narrative that disrupted the promotion of Whitaker’s book. Then the comedian Hannibal Burress took a shot at Cosby last month, bluntly calling him a rapist in a club show. A fan video went viral.

Still, most mainstream outlets remained on the sidelines. NBC was still working on its sitcom and Netflix pushed forward on promotions for its standup special on the 77-year-old star. No major news outlet had much to say. Cosby was one of an odd collection of celebrities with unsavory stories in their past that curiously were either not mentioned or downplayed.

In a piece for CJR last week, I discussed the media airbrushing of the coverage of cultural stars:

There is a reflexive disinclination on the part of most journalists to talk about their subjects’ sex lives, for a multitude of obvious reasons. Whitaker pointed out that, just by rehashing the allegations, he would be giving license for them to be repeated in other outlets. That’s bending over backward to be fair to the entertainer, by not publicizing charges that may have come his way only because he was rich and famous. But wasn’t being rich and famous what allowed Cosby to fly young women around the country as he lectured African Americans on the importance of family?

… [W]ith celebrities, an imagistic force field seems somehow to repel news that isn’t in keeping with that star’s image. The narrative of the star is so powerful that digressions that clash with it are discarded.

The day after CJR posted its piece, the Washington Post ran a column by one of Cosby’s accusers eight years after she first went public. The headline: “Bill Cosby raped me. Why did it take 30 years for people to believe my story?”

Outrage mounted, seemingly by the day. The tipping point was the product of two rare journalistic moments—one traditional, one not—that came within 24 hours of each other last weekend.

The first was a Cosby interview on National Public Radio’s Weekend Edition with Scott Simon on Saturday morning. The pass Cosby had been given in such media appearances in the past was revoked, abruptly. Simon asked Cosby three times to respond to the charges. But Cosby refused to say anything. “You’re shaking your head no,” listeners heard Simon say repeatedly. A transcript of the conversation, with Cosby’s replies labeled only as “SILENCE,” swept through the Web.

And on Sunday a rambunctious but serious movie blog called Hollywood Elsewhere published the first-person account of a woman who said that she too had been drugged and assaulted by Cosby. The writer, Joan Tarshis, was a longtime Hollywood writer and publicist. The account — by a woman who had not been heard from previously — was frank and compelling. The post was widely picked up; Hollywood Elsewhere reported that its servers crashed.

On Tuesday Netflix said it would not be showing Cosby’s standup special. Yet another previously unknown victim went public on the Entertainment Tonight website. On Wednesday, NBC — a television home to Cosby since the mid-1960s, when he was the first black star of a network TV drama, I Spy — cancelled the proposed sitcom. The same day, Variety pronounced his career effectively over.

The odd thing about Cosby’s downfall is that nothing had changed in the last decade; there was no suggestion that any of the events described by his new accusers had happened since the first allegations and an accompanying civil case, which was settled. The initial lack of followup by influential outlets created a sort of reverse pack mentality—a reinforcing silence. No one mentioned it, because no one else had.

This was helped along by the feel-good nature of much arts writing: If the point of the story is to promote a comedy appearance, or a new book or other product, a digression into allegations of drugging and sexual assault was buzzkill.

The decade-long silence should be fodder for students of the press and of public relations. Cosby’s lawyers and publicists had always given furious and dismissive denials to the allegations. For a decade, helped along by an unquestioning media, the strategy worked.

Has America ever needed a media watchdog more than now? Help us by joining CJR today.
Bill Wyman is the former arts editor of NPR and Salon.com. Follow him @hitsville.